I had my doubts but this corset project was surprisingly easy, not at all frustrated-hair-pulling-inducing or, well, evil in that special way that only corsets and stays can be. I now dare to say it, having safely finished, that I actually liked making this corset. Shocking.

The pattern is from Norah Waugh's Corsets and Crinolines  and I really didn't modify it at all. The top fabric is the same I used for my 1820s pelisse and it's still one of my all time favourite fabrics. There's a steel busk and spiral steel bones, metal eylets and I used jute yarn for the cording on the bust. 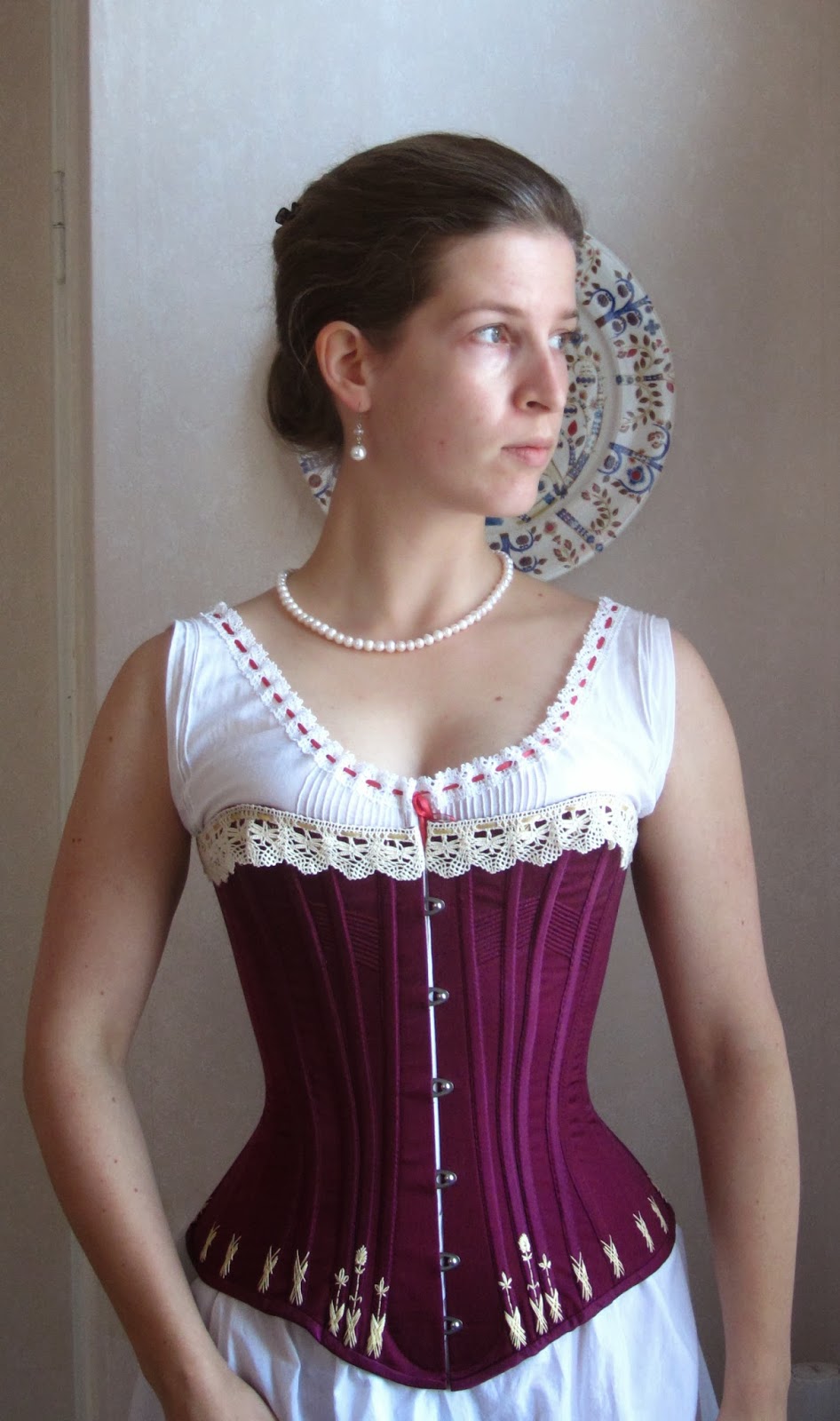 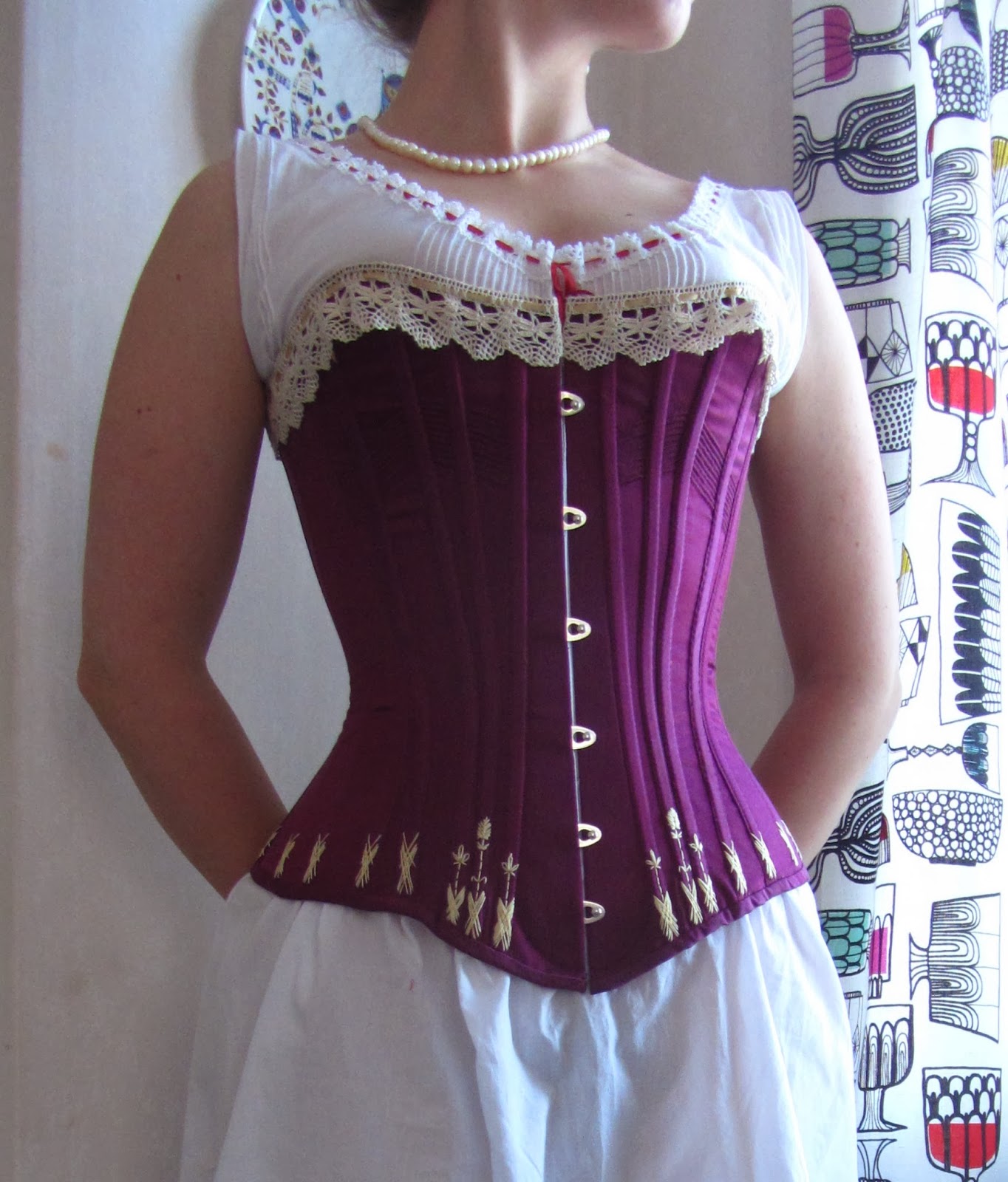 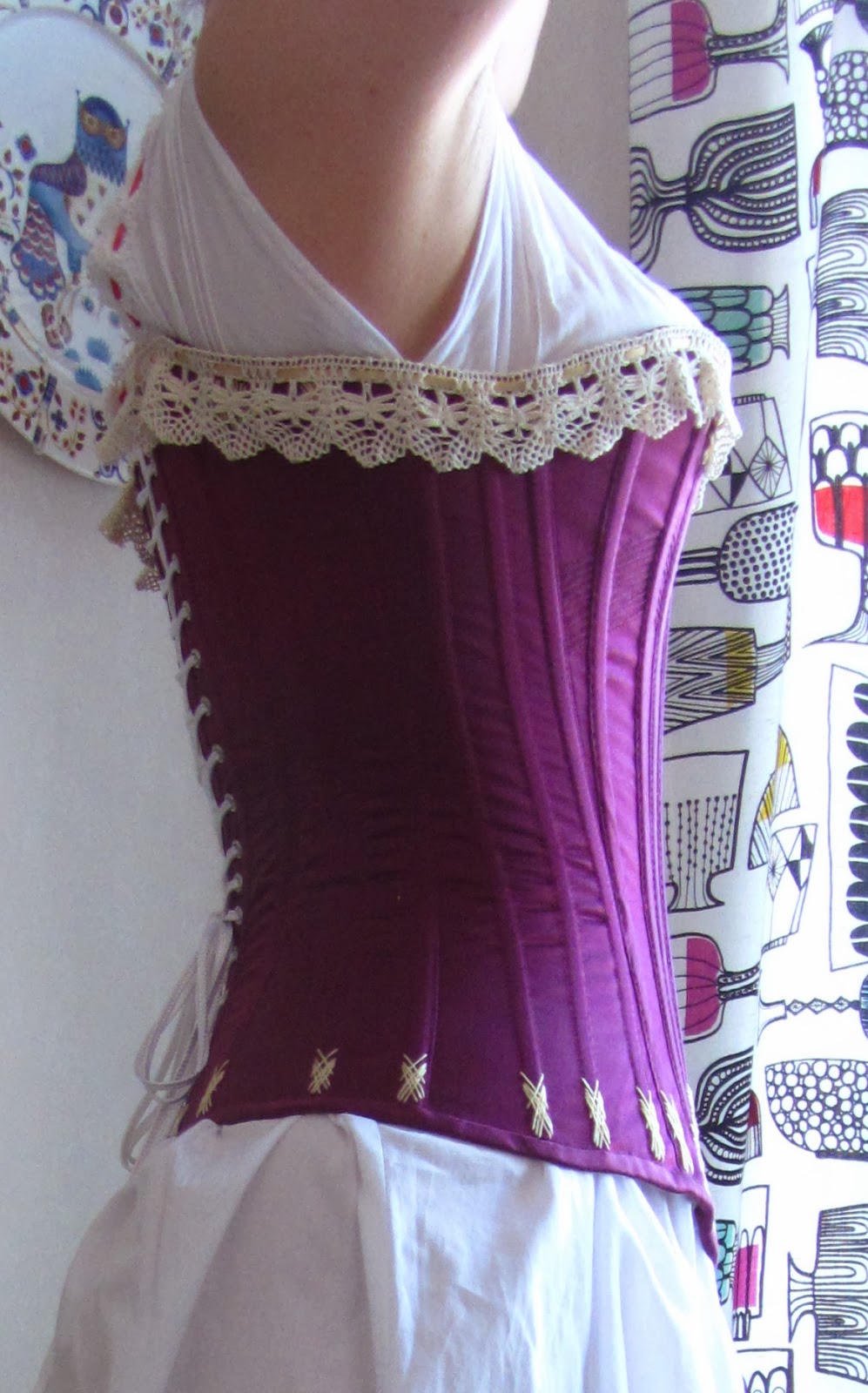 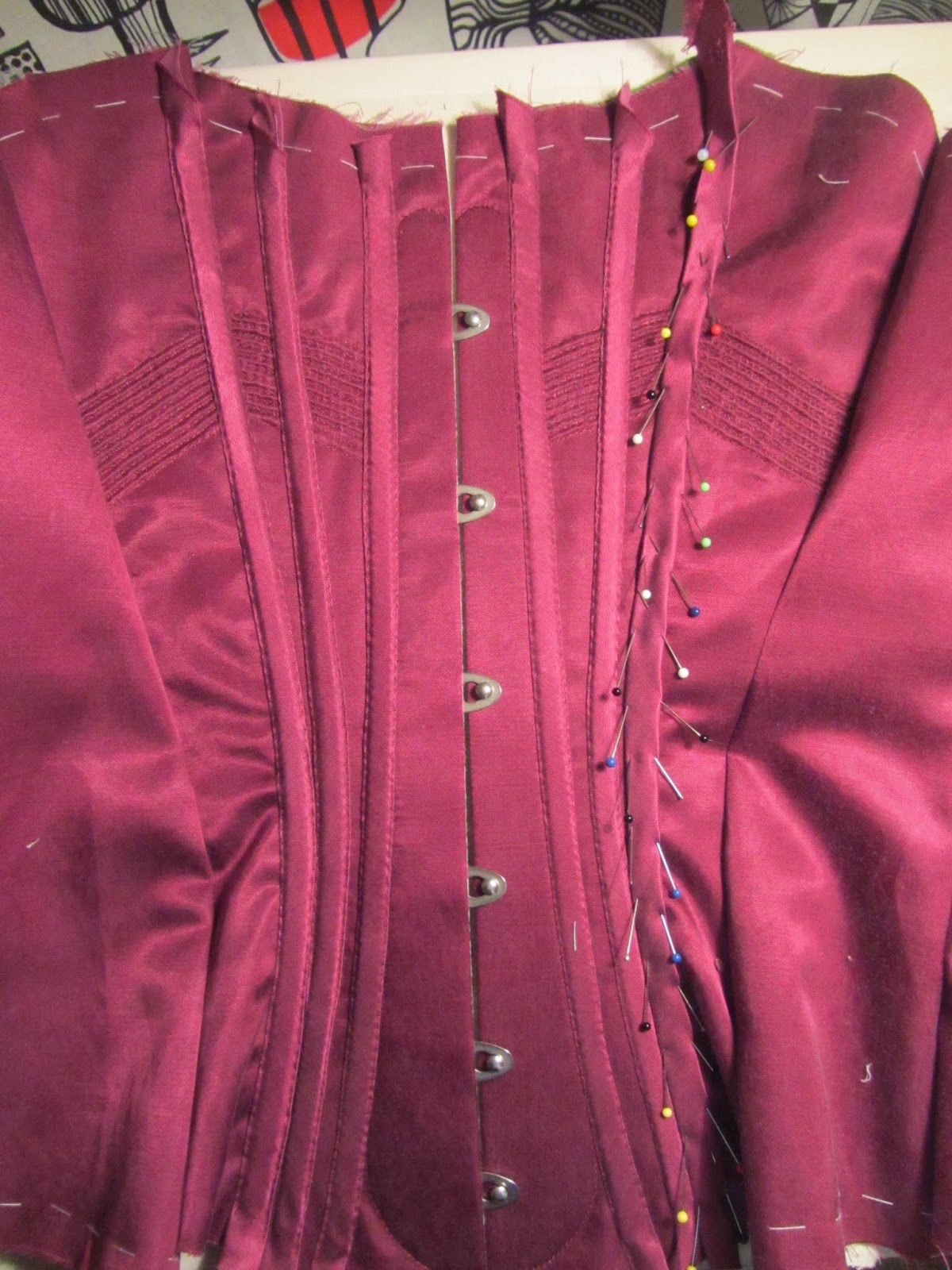 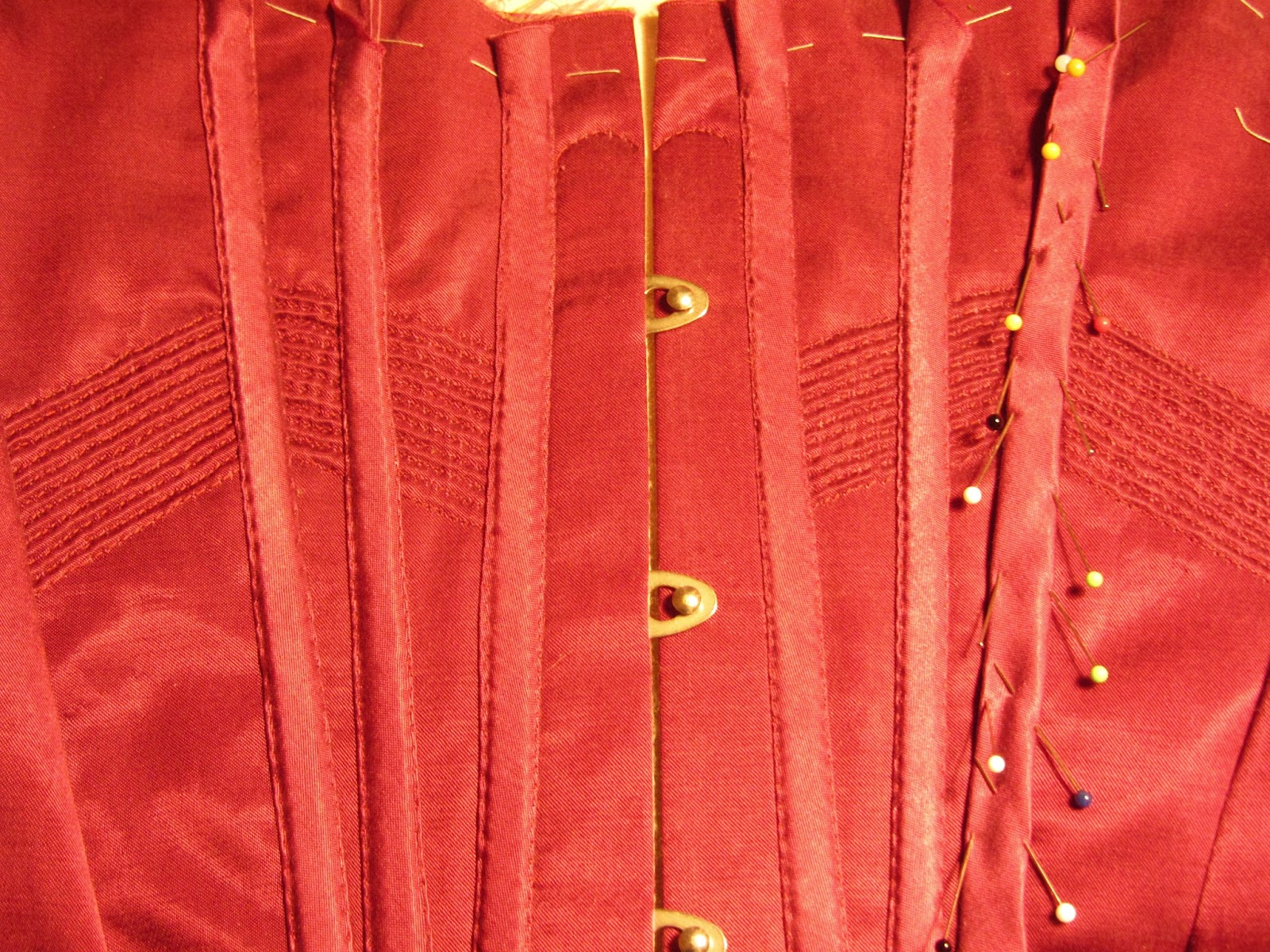 Somehow all this should make a corset from the year 1880. I won't lie, I'm definitely stepping out of my comfort zone here. 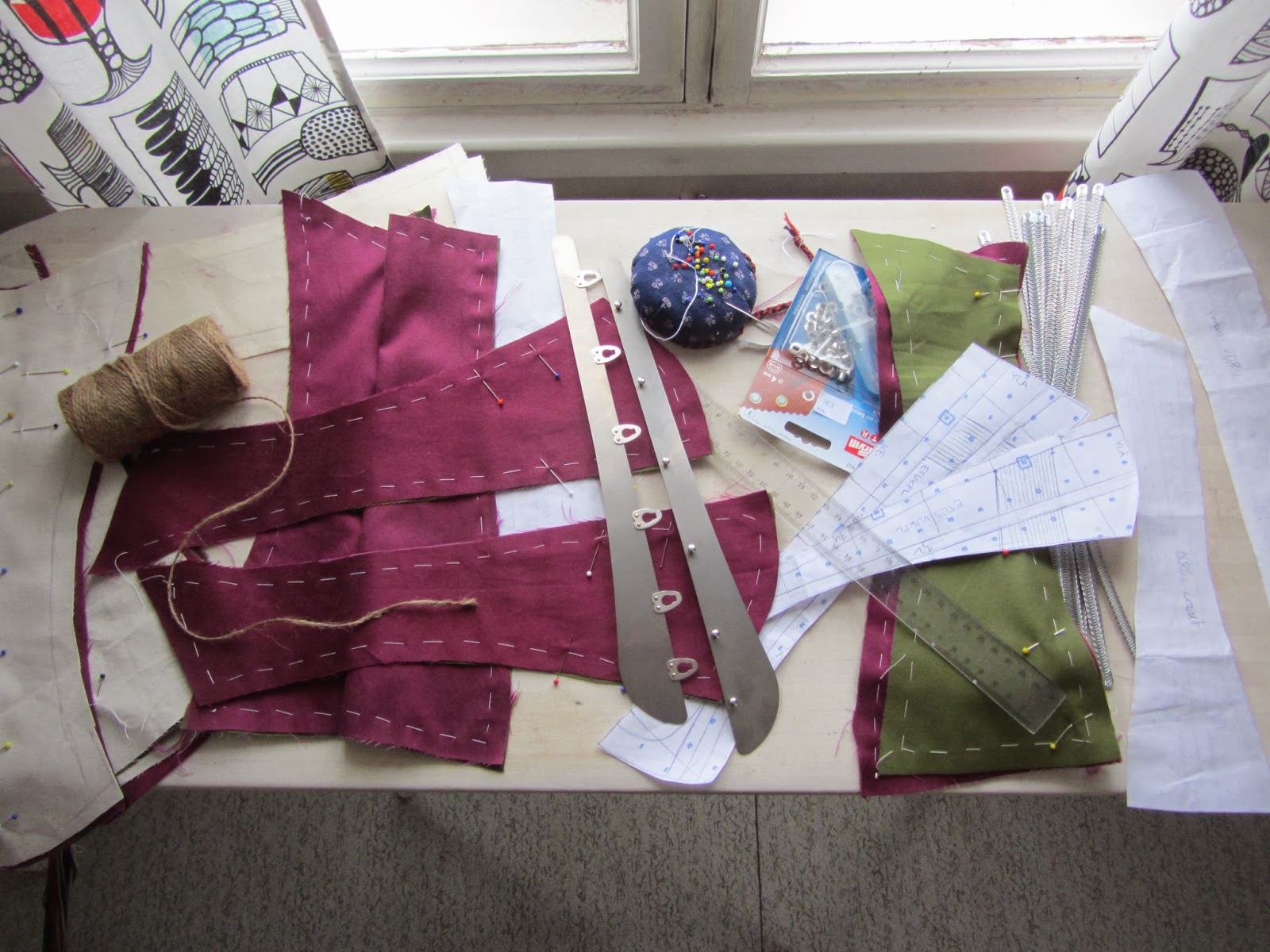 On one hand, I really want to get started and get the corset done, because after that I can begin sewing the dress which I really want to do. On the other hand, I'm scared to begin, because based on my previous attempts with corsetry and staymaking, there's a fair chance that everything will go spectacularly wrong. Maybe the pieces will sew themselves if I stare at them long enough.

I've made a chemise, though. I've been having a Hercule Poirot binge for about a week and a half now, watching all the seasons of that great series and sewing pintucks on my new chemise. I got the pattern from the Fashions of the Gilded Age I, and then modified it slightly. All is hansewn, as usual. I like it and I hope it works with the corset, if I ever get around making it. 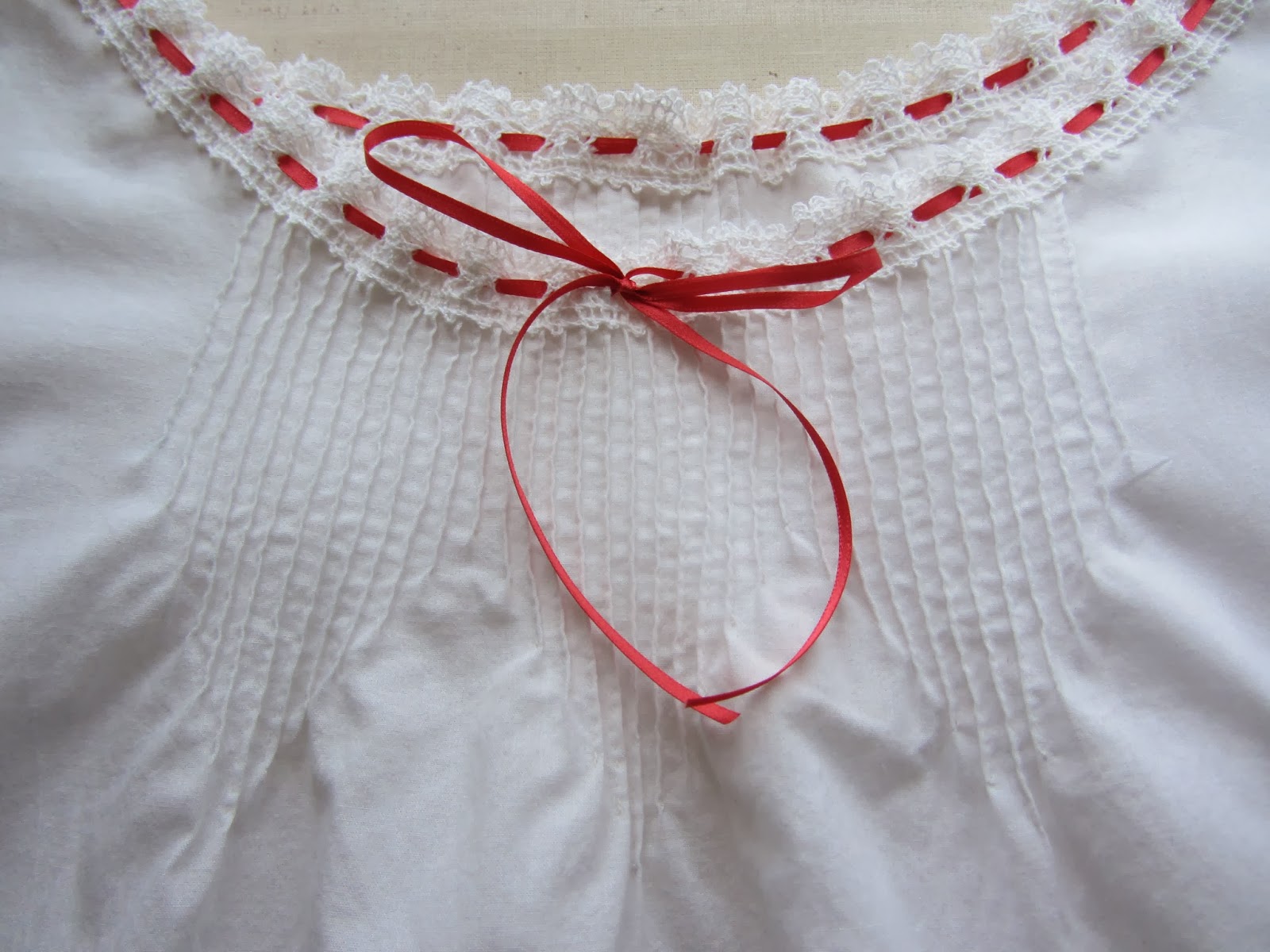 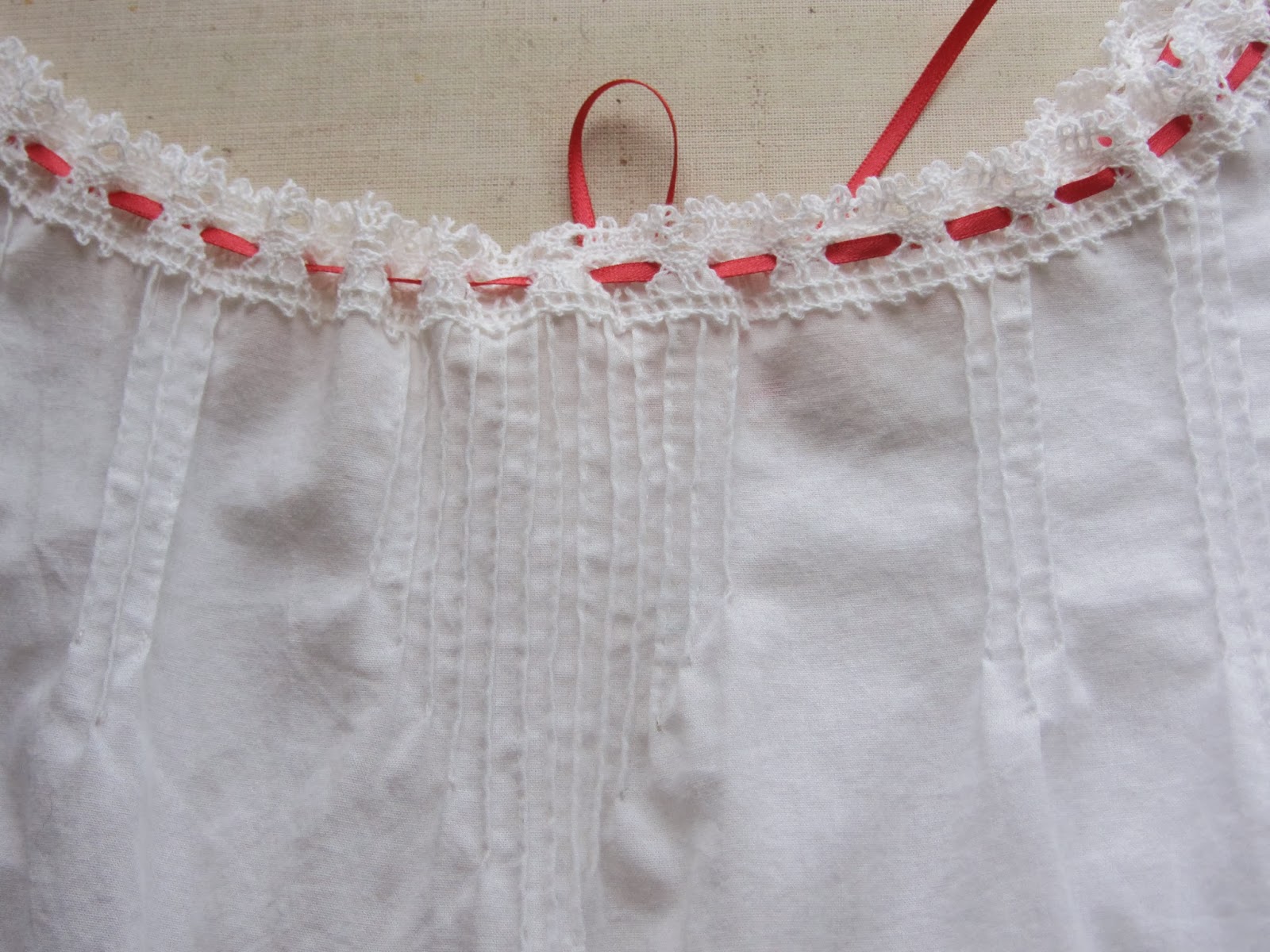 It's nice to have a new dress. This particular dress has been on my to-do list for a long time, ever since I bought those Indian block prints and long before that really. The reason I haven't got around making it until now has been, as ever, the lack of the right fabric. Anyway, I found nice white cotton voile around the New Year and was really chuffed to bits. Finally!

The "little white dress" is certainly the ubiquitous Regency fashion
item, but the patterned print fabric dresses were equally popular, in all available colours. I'm not well read enough on the topic to write about it at lenght, but there's plenty of information on the subject to be found in the net.

The dress pattern came from Janet Arnold's book, and it's the same I used for my very first Regency dress, the white fern dress. I always liked that pattern and it worked well, so why not use it. I cut the pieces and then set out printing them. I used the narrow border print on the neck edge, the cuffs, the "belt" piece and the hem. For the hem I also used the big paisley prints to create a wide border. The rest of the dress is printed with the little flower motif. I measured the hem border very carefully, to make the both hem pieces match when I sewed them together. I was a bit less meticulous with the flower motif, and didn't measure and mark the placements. It shows, if you examine the dress really closely, but not so much as to really bother me. I'm already planning to print fabric for another project, so maybe I'll be more careful next time.

Now, then. Enough with this, here are some pictures. 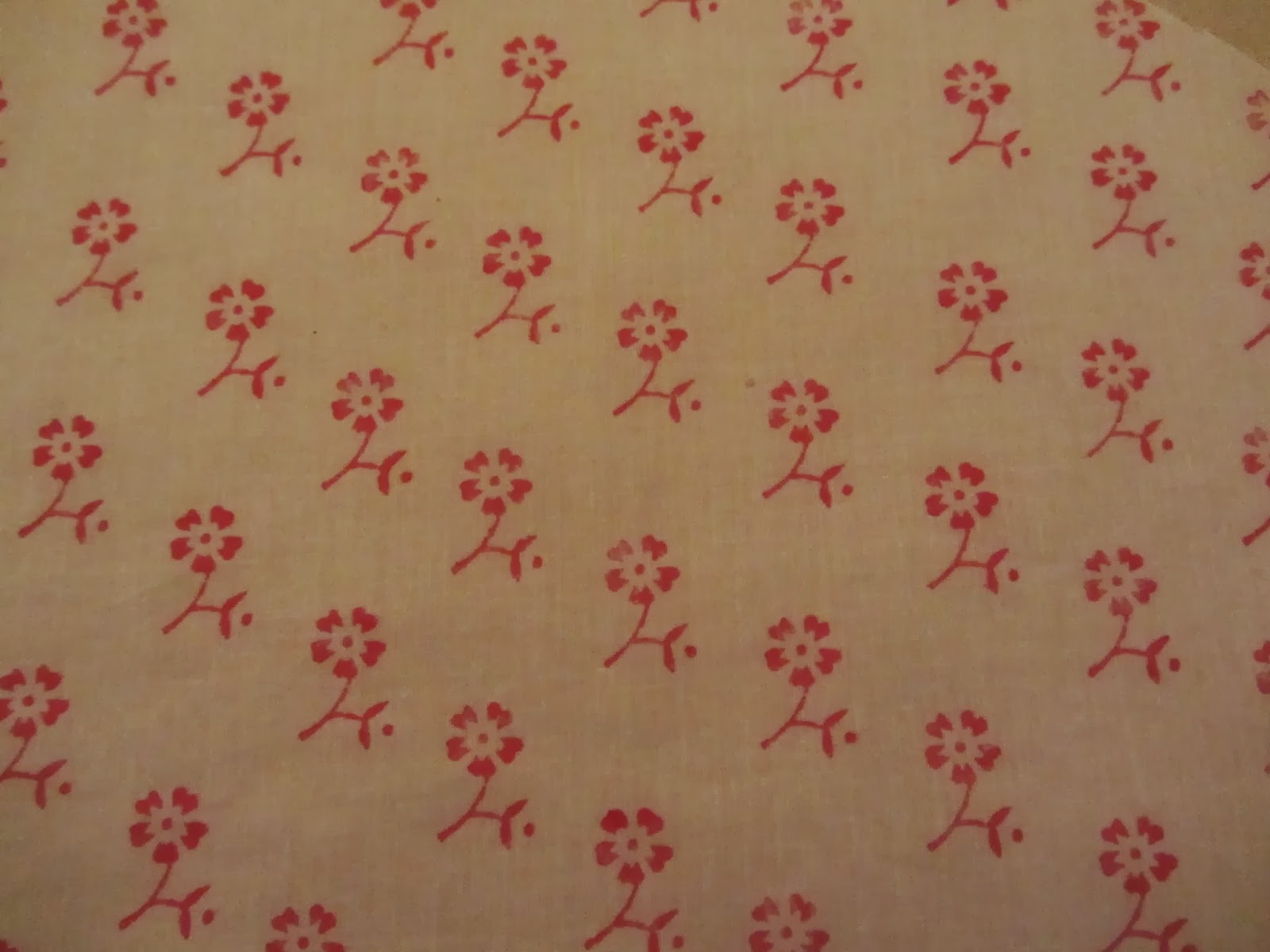 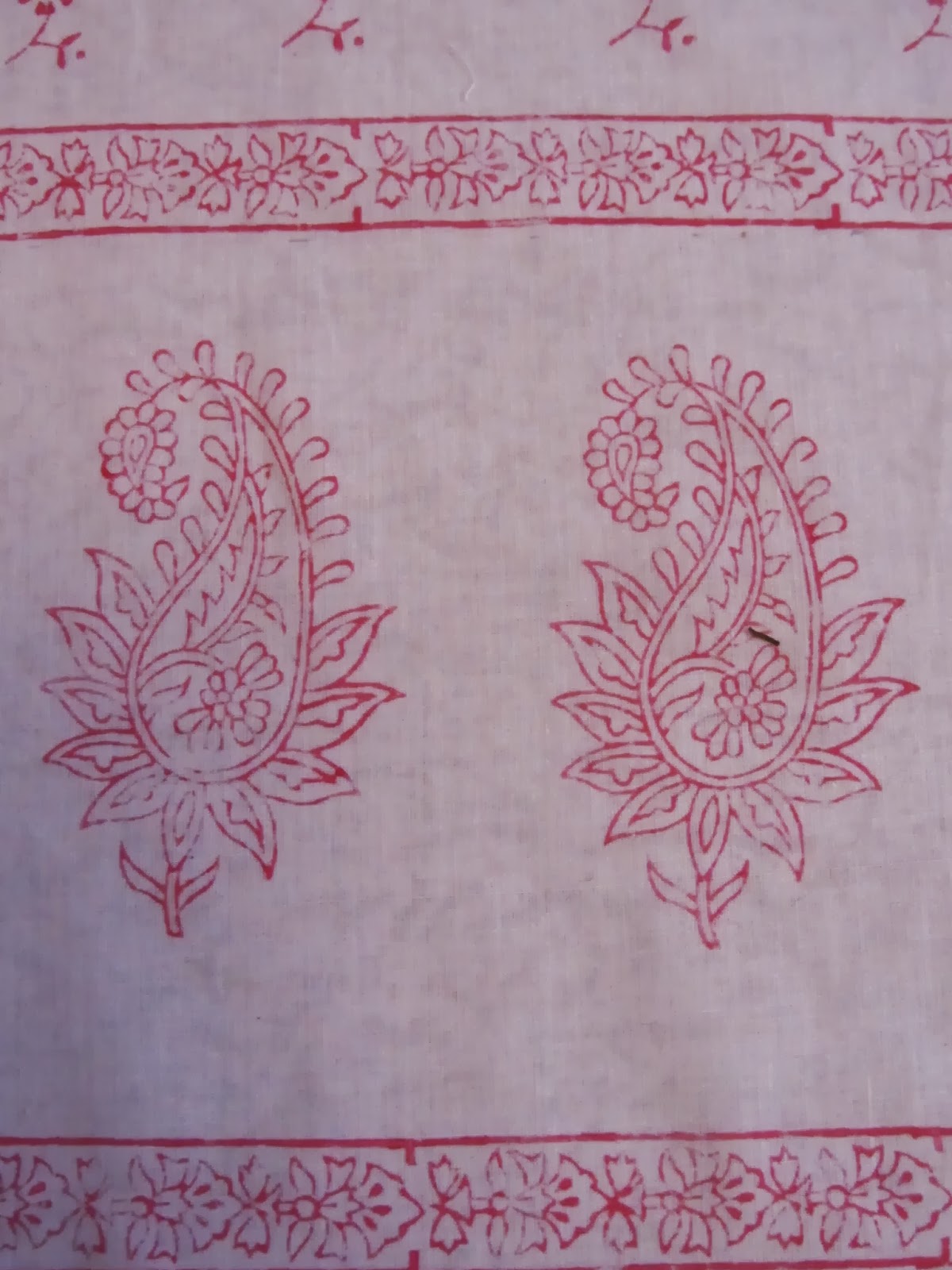 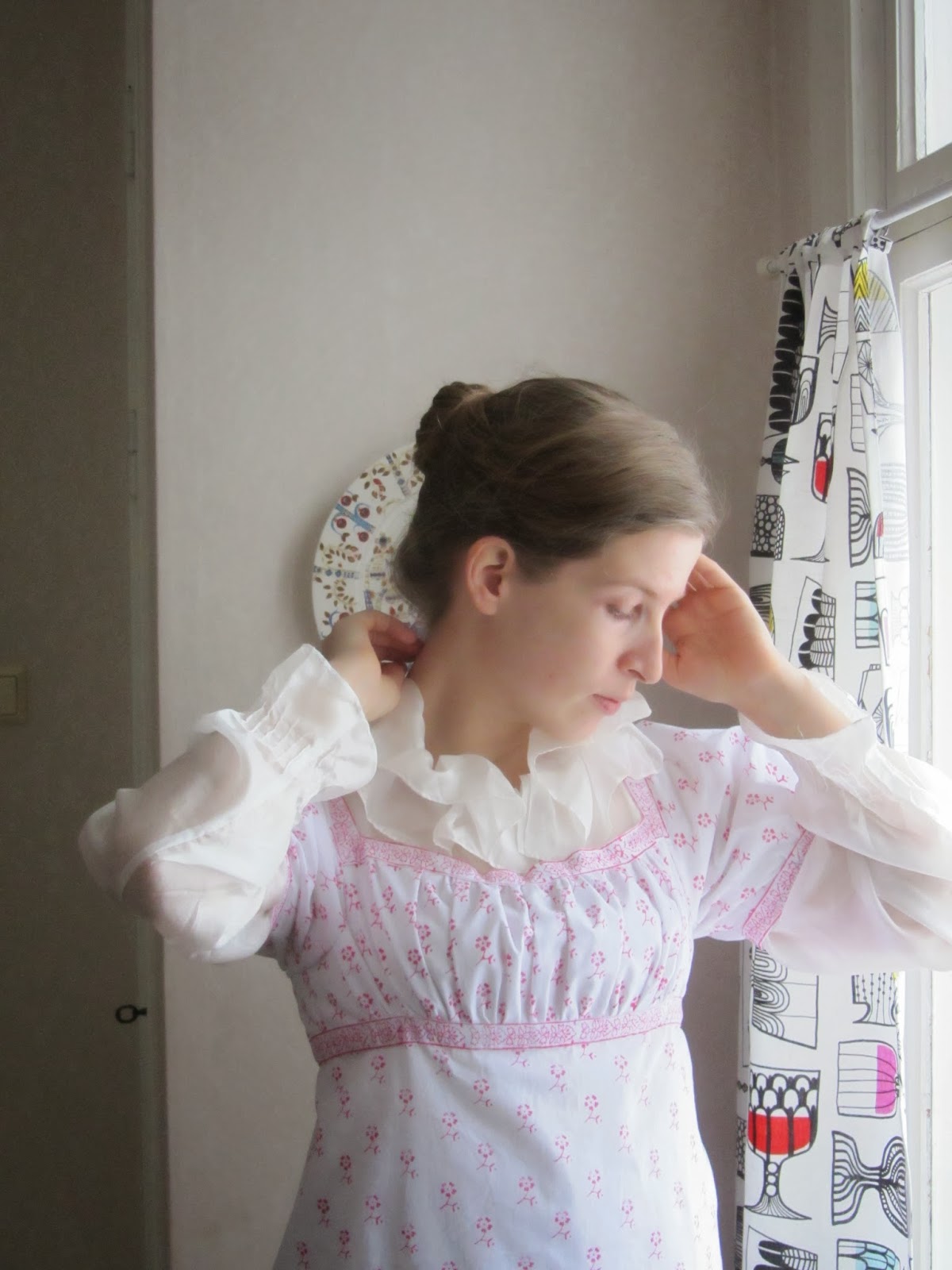 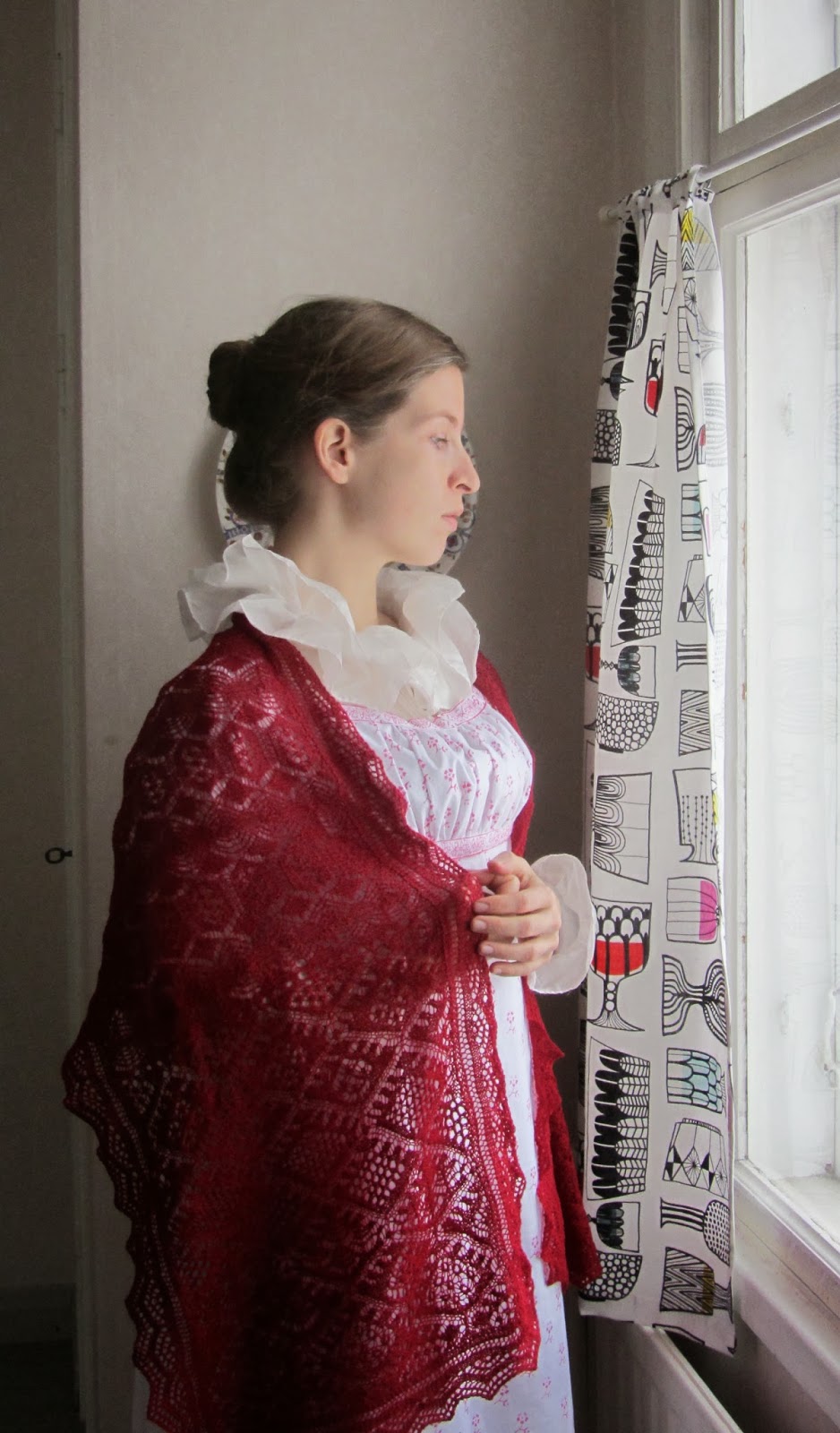 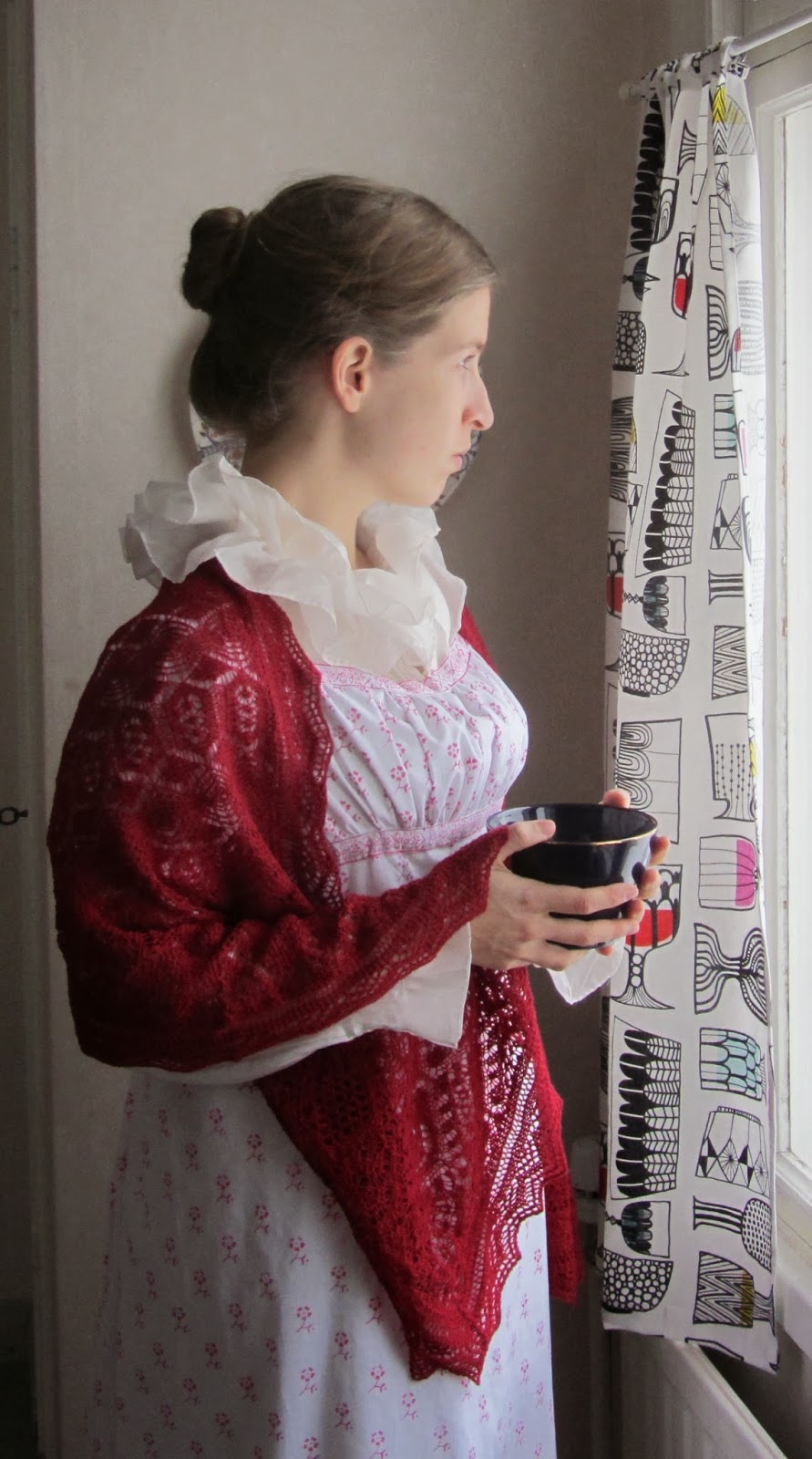 Look what I found! If I'm not much mistaken, I've found a painting that shows the back and the hem of Anne-Marie Dagnan's dress!!!

It was painted by her husband, Pascal-Adolphe-Jean Dagnan-Bouveret (that just rolls off the tongue...) who was a painter and a friend of Courtois. Courtois actually originally introduced Anne-Marie to Dagnan, and they were eventually married. I found this blog that told me more about Courtois, Anne-Marie and Dagnan. Funny how you get absorbed in these projects. I only wish I had the same kind of fervor and determination with my dissertation research...

Of course I can't be absolutely certain that this is indeed the same dress, but the colour and some of the details, and the fact that Anne-Marie's portrait and this one were painted just a year apart would point to that. Not to mention the connection between the two artists and Anne-Marie. In any case, I'm very excited about this, and it's certainly helping me to decide on what the skirt on this dress should be like. I've looked at tons of fashion plates and extant gowns from 1879 to 1882 and I think I know what I want to do. The bodice will be a cuirasse shape, with the closure in front like in this gown. There won't be a bustle, because from what I've learned, the 1880 dresses (at least day wear) were very column-like and more natural form than tournure shape.
Also, the corset mock up turned out very nice, so 1880, here I come!
Lähettänyt Nora klo 9.37 6 kommenttia:

... about the gloomy weather that has continued for days, and about my sewing projects, particularly the Eremitage dress. I seem to have lost interest in completing it and I'm considering if I should take it apart and maybe try and make something else. I don't know what it is, at first the dress seemed kind of interesting and the results so far are passable, but I'm still thinking that maybe the shirred drapery makes the hem a bit too heavy, after all and if I add the gingerbread trims, they will only fray and then the dress will annoy me even more, what with all the hard work wasted.
I've mentioned the Courtois portrait for several times already and I'm more and more intrigued about the gown Ms. Dagnan wears in it. I joined Pinterest and started to put together a pinboard of 1880s dresses that have similar elements as the dress in the portrait. I've also had The Fashions of a Gilded Age  on loan from library for quite a while now and I think maybe this pattern could work with the dress in question: 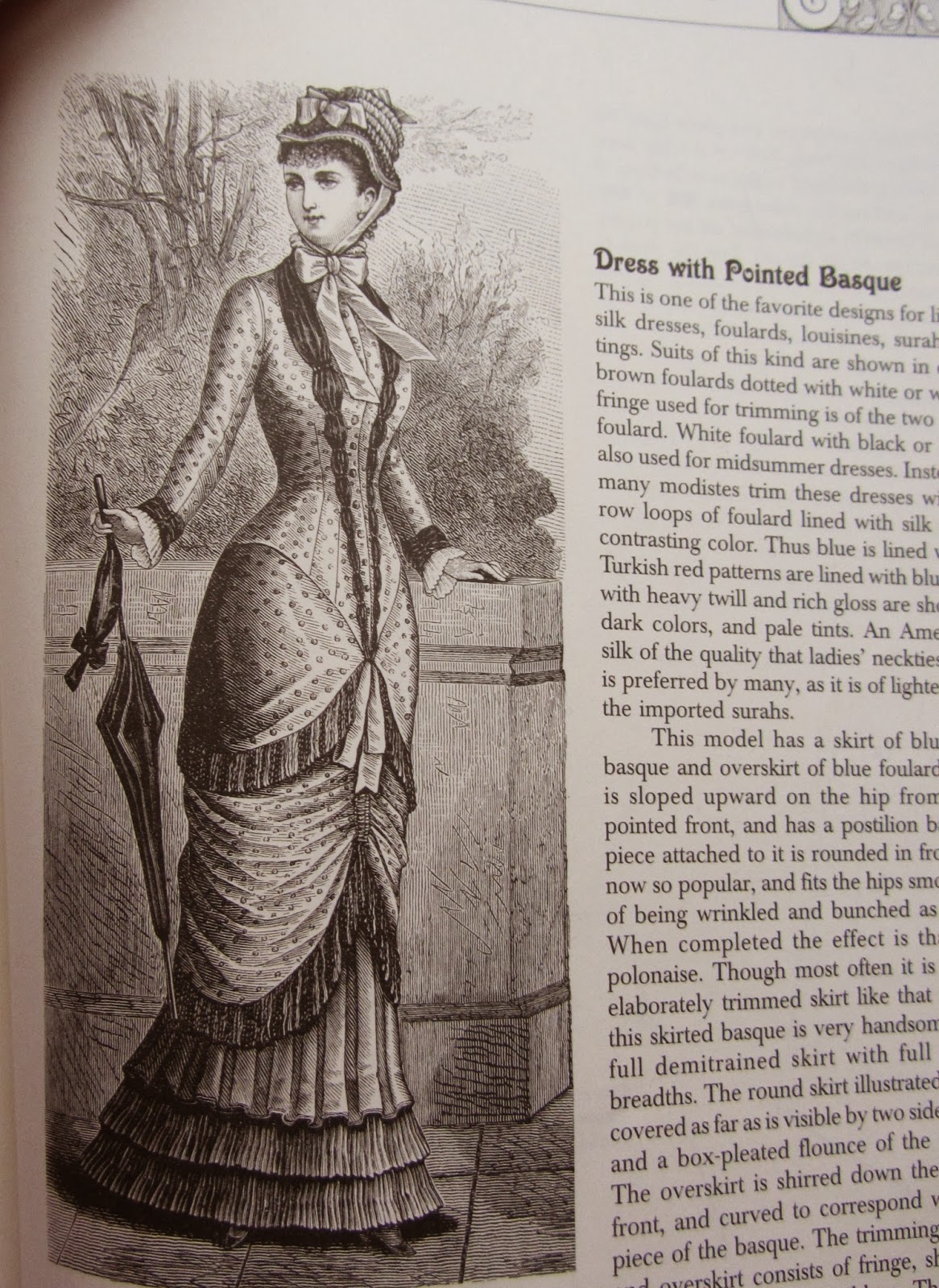 Then again,  I've stared and stared the portrait and still can't understand how the bodice closes. 1880s is a completely new era for me, so any advice, ideas and suggestions are gratefully received!

If I dump the Eremitage dress and take it apart, I could use the fabric for this, because I think it would suit this dress better than Regency gowns, anyway. I saw that the shop still had the fabric and on sale, to boot, so it'd be possible.

I'm trying to make a mock up of an 1880s corset, so if that works out, maybe this dress will too.
Lähettänyt Nora klo 4.11 6 kommenttia:

I really should be in bed by now, but I felt like writing a little project update first. I'm sure I'll regret this in the morning...
So, I've been working on the Eremitage gown, and the biggest and the fiddliest part, aka the weird curtain hem decoration is done and I think I managed to produce a drop front gown without actually having to cut  in to the hem, and still have the 1820s silhouette. Here's a couple of photos I took before the holidays. The dress still needs the gingerbread trim, the sleeves and a collar, and I need to figure out all the closings and buttons and pinnings and hooks and eyes and... Now it actually looks like this gown might have all the possible varieties of closing mechanisms save the zipper and snap fasteners. 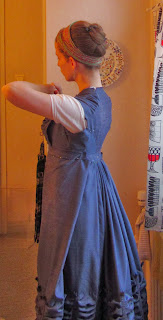 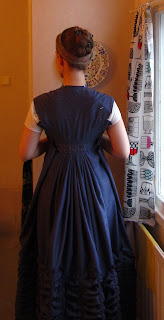 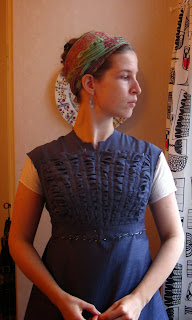 I'll try to have some better pictures taken over the weekend to show the construction in more detail. It's been so depressingly dark and lightless all December that there's not really  a point to try to photograph anything. But hopefully now some sunshine and daylight will return.
Yesterday I began dabbling with a project that is very un-me, meaning corsets. I don't like staymaking or corsetry, I've said it before, but there I was, enlargening patterns and cutting a toile for not one but two 19th century corsets. Weird. Both the patterns came from the Corsets and Crinolines book, one from 1844 and the other from 1880. I managed to put together the 1844 model and stick some bones in it to try it on, but I'm not really sure what I think of it. First of all, it was maybe a bit too big for me and felt like it was sliding down all the time. Also, I'm not used to the crisscross lacing thingy where you have the loops to pull the laces tight. It took forever to get the corset on, the lacing in order and the result was not worth all the effort. Back to the cutting table with that one.
I've yet to make a try-on version of the 1880s corset, I've only sewn together one layer of a mock up and I think I want to do a more careful job with it than with the 1844 semifiasco.
Actually, I really should make a new pair of Regency short stays, but I thought it'd be interesting to try and see if I could produce a passable Victorian corset. If the 1880s corset works out, I might try and make that dress Anne-Marie Dagnan is wearing in a portrait painted by Courtois.