Today I finally finished a dress that has been lying around for quite some time. Before the Bath trip I found nice burgundy cotton with a black print pattern and I made a drop front gown out of it. Then I got distracted, had stuff to finish for Bath and... But now it's ready! I really like it, the hem has massive amount of fabric pleated, so it's maybe more of an early 19th century fashion than anything else. I used my basic bodice pattern, the same as for the white embroidered dress, but with drop front adjustments. I also found The Hungarican Chick's tutorial on bib front gowns(aka drop front gowns) very helpful. As always, everything is handsewn, and the fabric worked like a dream, it's stiff enough to hold its shape and pleats nicely, but so thin that pleating doesn't make the dress look bulky. I might add some ribbons to tie the cuffs a bit tighter, but I ran out of ribbon for now. 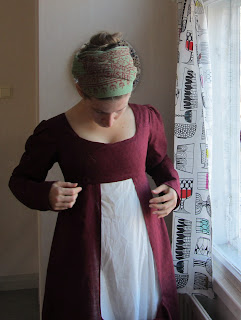 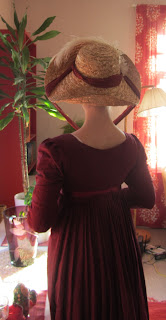 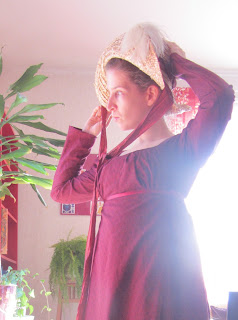 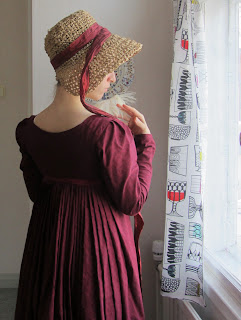 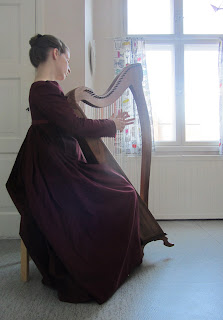 Last weekend I started sewing the Costume Close-up (Baumgarten) swallow tail jacket and so far it's been a lovely project. My local library very obligingly added the Baumgarten book to their collection after my suggestion and I recently got it on loan, so I enlarged the pattern and was good to go. In an earlier post I mentioned the great tutorial written by Rebecca at A Fashionable Frolick and it really has helped me a lot. For once it was nice to have clear and structured instructions, rather than just winging it on the go. 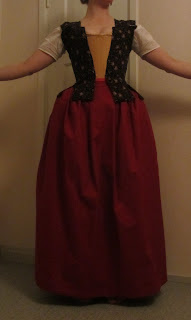 As said, I made a red cotton petticoat to go with the jacket. I also was thinking of making a green one, but a proper green fabric (aka. a shade I'd actually like) is very difficult to find here, so red is a good choice. I seem to have misplaced my cap, so maybe this calls for a new one. I'd like to do some proper whitework embroidery. Also, I need to make an apron. I've been toying with the idea of a black apron, but I'm not sure if that's period accurate. I know that black fabric was used for so-called better clothes, especially with the more rural folk, but I need to research a bit more. I just think that black would go better with the jacket and the petticoat than white.
Lähettänyt Nora klo 12.14 4 kommenttia:

When I was in Bath in September for the Jane Austen festival, I met Megan who had used saris to make gorgeous Regency gowns. Inspired by that I decided to look for a sari of my own when I returned to London for a few days after the festival. This is what I bought: 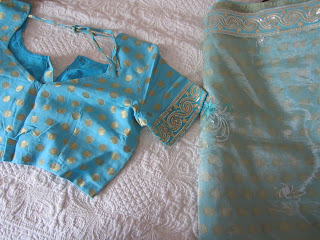 The sari itself is about 5,5 m long and 107cm wide, half turquoise gold-spotted crepe-type fabric (I think), half golden yellow, sequined organza with a sequin border running around the edges. There's also a sari blouse, which I have made into the gown's bodice. Before cutting up the sari I decided to wear it in its original form, you know, just because :) I looked up for some sari wrapping tutorials in Youtube and here's the result: 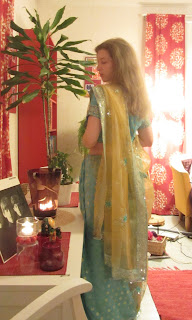 The blouse needed (and still does, as I found out after attaching the hem :P) some serious taking in at the back. I intend to make a drop-front gown with an open robe on top of it, the turquoise part being the gown and the organza part the robe. The gown itself came together very nicely, though, as said the bodice still needs tweaking; I should open the neckline some more and take the whole thing in at the back, again. I didn't really need to cut the hem at all, only to separate it from the organza part and sew the shorter ends together. The hem piece was already edged with the sequin border, so that worked out well, too.

I'm making the open robe after Janet Arnold's pattern, though I decided to make the back piece of the robe bodice separately, because the sari is narrower than needed for the pattern to work (i.e. I haven't got enough for the pleats to work right at the back). It still needs adjusting; maybe I should press it a bit so that the pleats would fall better and not poof out so much.

Last weekend I finally had time and energy to take a look at the 18th c. garments I have made so far. I decided to take some proper photos of them all to see how they look and fit. Here are the results. 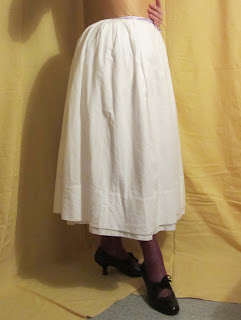 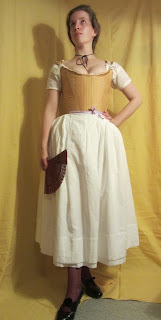 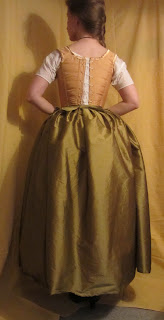 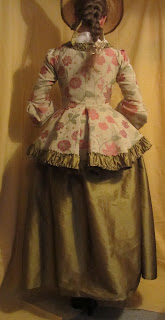 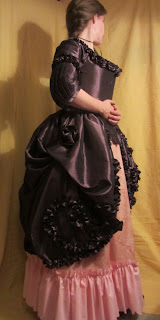 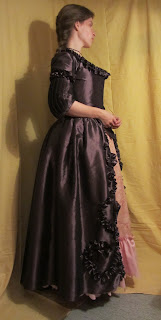 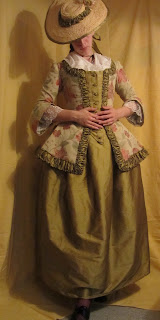