I began this project sometime in the early summer and have been working on it on and off until November. I got the riding habit bug from Sanna of the Rococo Atelier and by some bizarre lucky alignment of stars I even managed to find fabric in the exact colour I had envisioned (when does that EVER happen??).
For some reason, yellow has become one of my go-to colours and what better time period for it than the 18th century. From what little research I've done, yellow seems to have been the height of fashion throughout the 18th century, owing to the popularity of all things Oriental during that time (yellow, after all was the colour exclusively reserved for the emperor of China, among other things). Riitta Pylkkänen's Dress of Gentlewomen in Finland in the 18th Century mentions yellow as the most fashionable colour. Annoyingly, I can't give the exact quote because I don't own a copy of the book (it's fiendishly difficult to find, having been published in the 1980s) and the city library is closed for the whole of December. Also, The Diary of Mantua Maker writes about the popularity of yellow in her posts about 18th century colours.

As many others before me, I used the riding habit jacket pattern in Janet Arnold's Patterns of Fashion. I had to alter the pattern to fit me (obviously); for example I drastically shortened the bodice and the sleeves. The finished garment is OK, but I would do things differently if I ever used the same pattern again. I think I maybe cut the jacket hem piece slightly too narrow, and the pleats aren't exactly as I'd want them to be. I think the habit fabric is very nice, it's medium thick cotton twill that feels almost woolly and it's very hard wearing and was generally nice to work with.

I pad stitched pieces of sturdy cotton on the insides of the front pieces and lined the whole jacket with cotton. the jacket fronts became very sturdy due to the interlining, lining and lastly all that trim I stitched on. The inside front edges, the sleeves and the jacket skirts are lined with taffeta. I'll maybe finish a waistcoat of that same taffeta at some later date. It doesn't really show unless you look very closely, but to add a little variation I used the reverse side of the habit fabric on the collar and the cuffs because it's the teeniest bit darker and the weave of the fabric looks different on the reverse side. I trimmed the jacket with antique gold coloured gimp trim and some antique gold coloured buttons. I might change the buttons later, either to metal or deathshead, depending which comes my way first.

The riding habit petticoat is your standard petticoat, with pocket hoops. I debated for a long time whether or not to cut the petticoat to accommodate the hoops because I think they're ridiculous, but in the end I decided to go for it and now I kind of like the look.

The  habit fabric is fairly heavy so towards the end of the day it was hard work to wear the whole get-up with the heavy skirts pulling at the paniers (and my hips and waist), walking around the fortress islands on original cobblestones...

I also made a tricorne hat out of a floppy 70s-esque felt hat, trimmed it with petersham ribbon and a cockade.

I wore the habit a couple of weeks ago in Suomenlinna Christmas event, which consisted of a day event for the general public, with 18th century military and gentlefolk re-enactors and of a private ball in the evening for re-enactors and other properly attired people.

The photos of the riding habit were taken by Sanna and Mia. 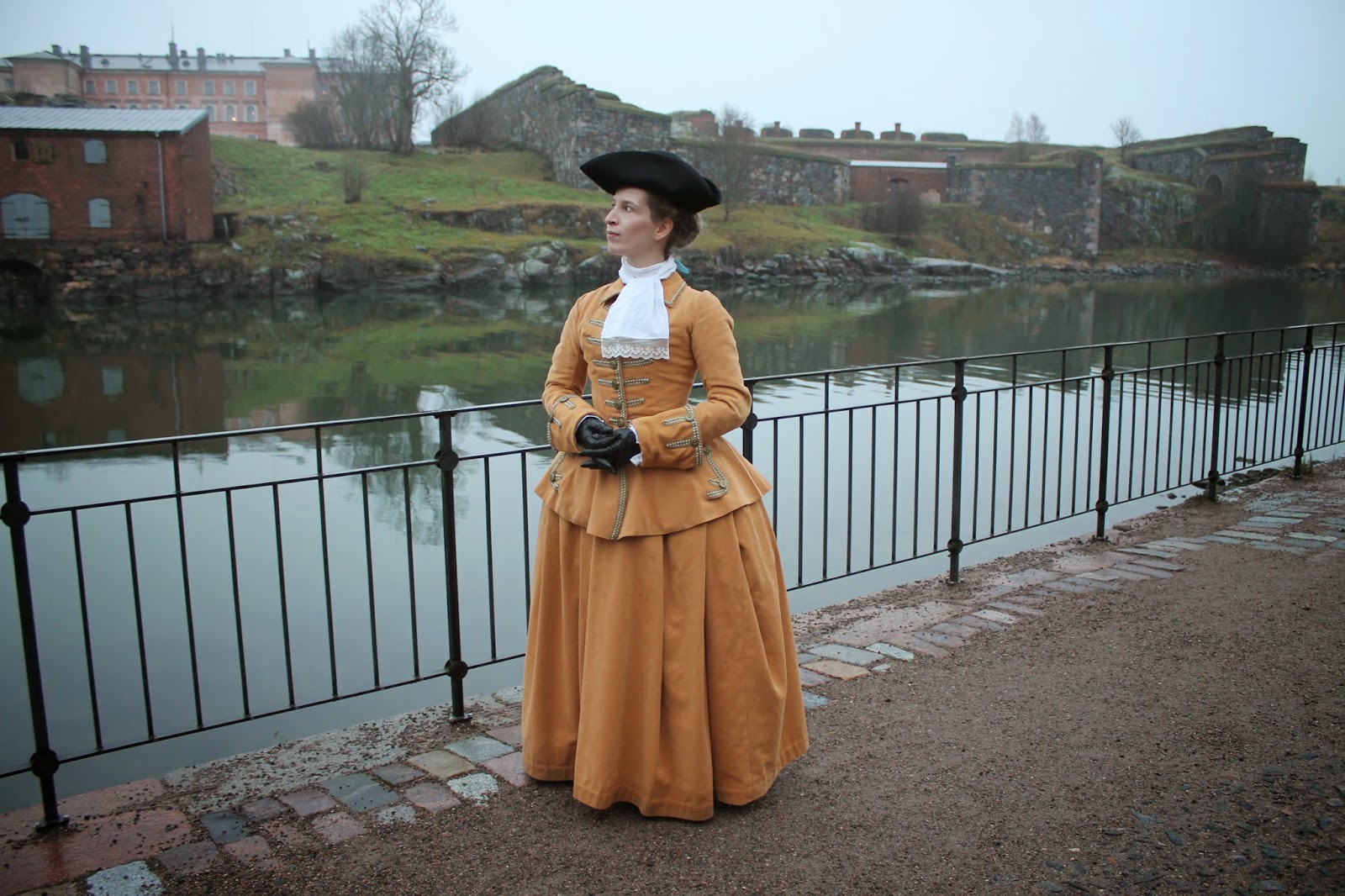 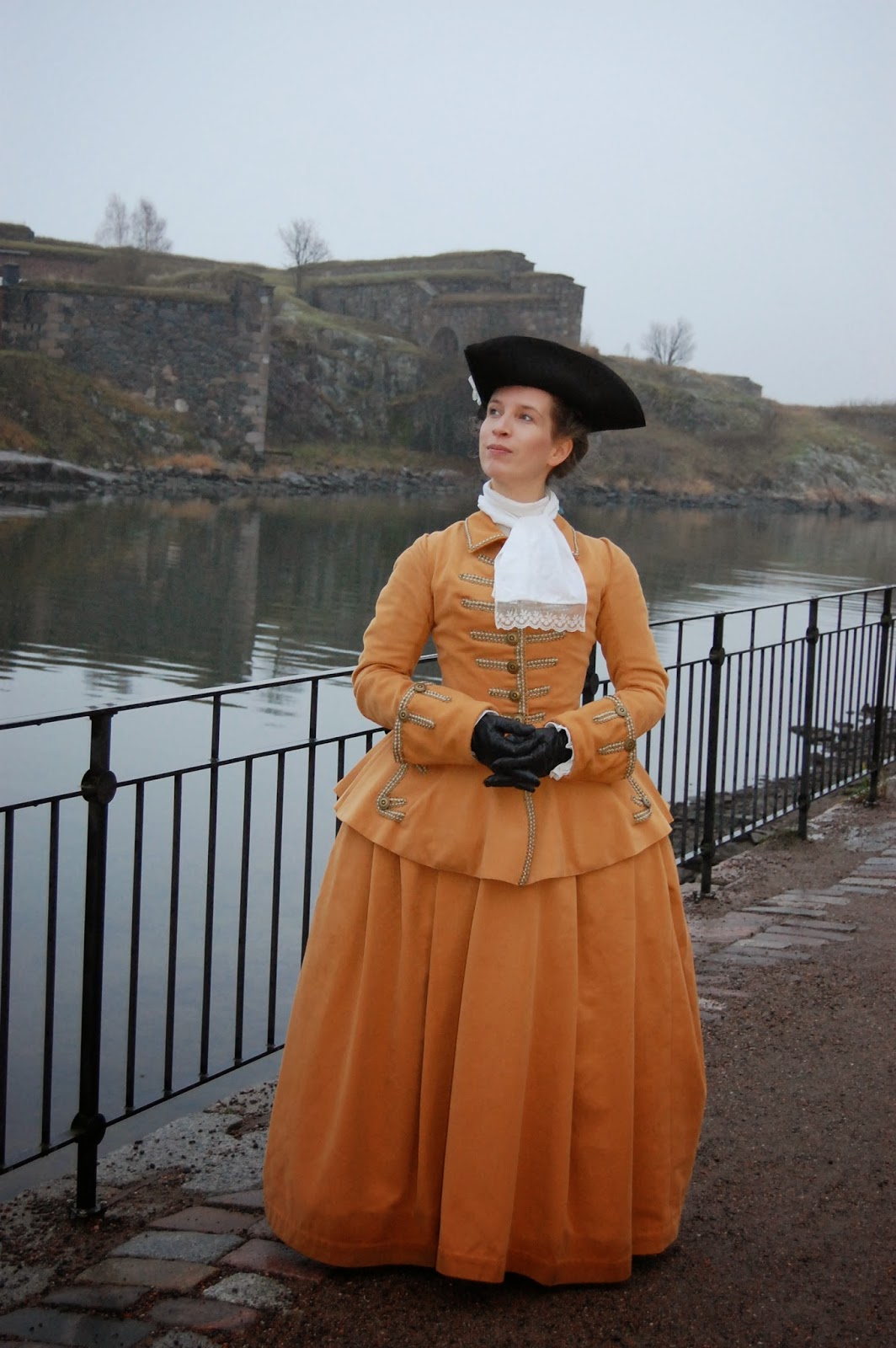 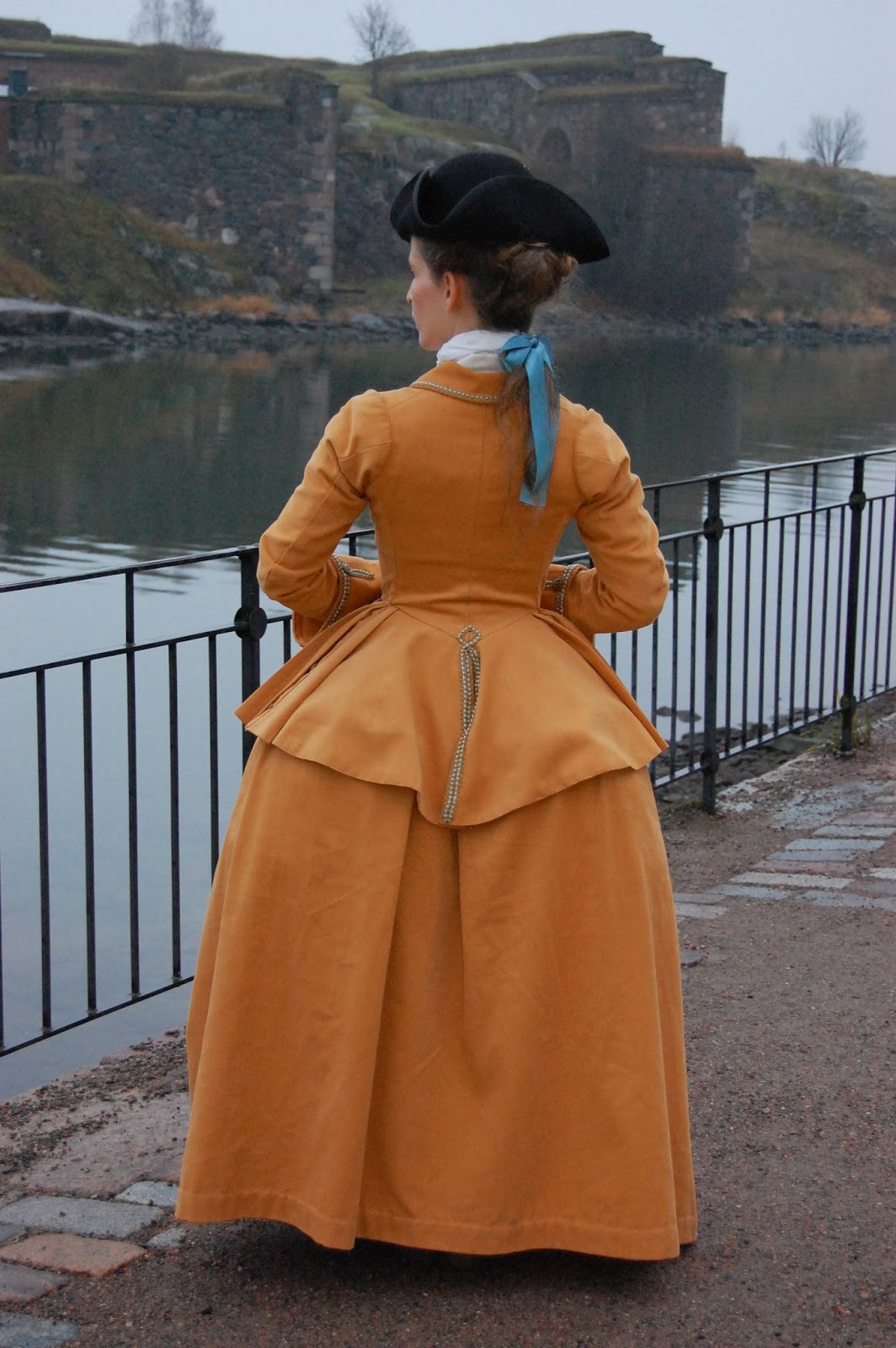 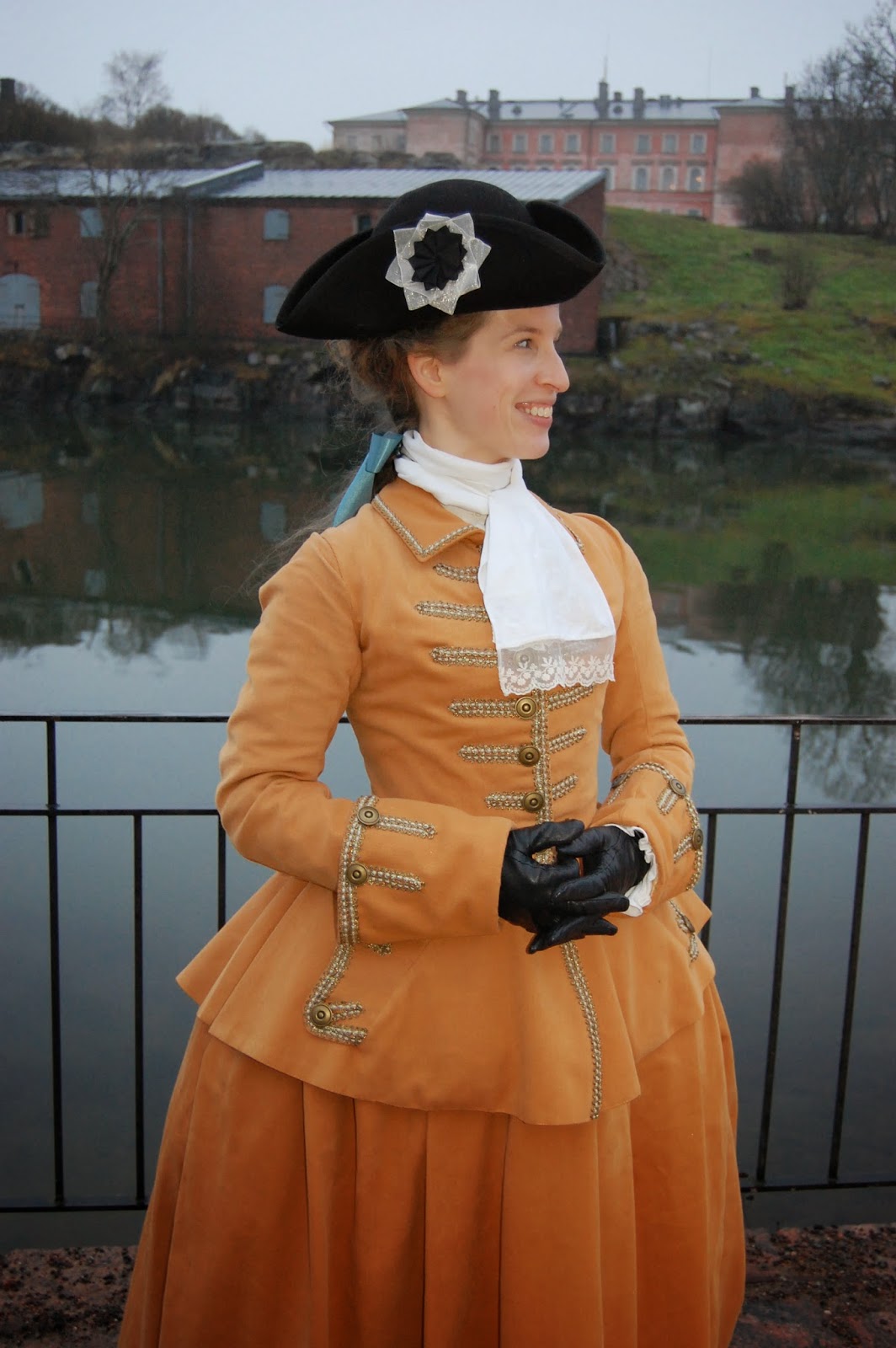 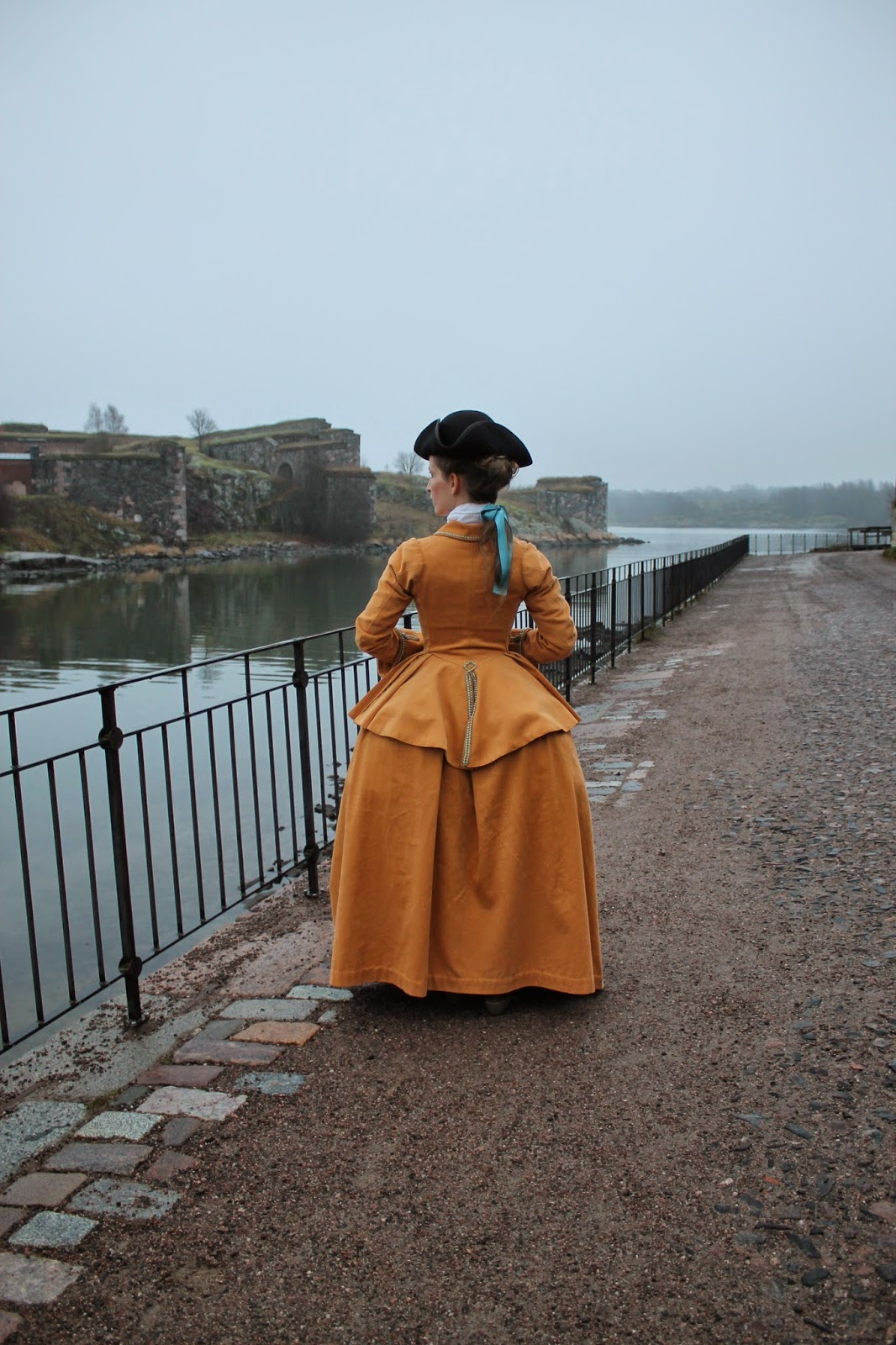 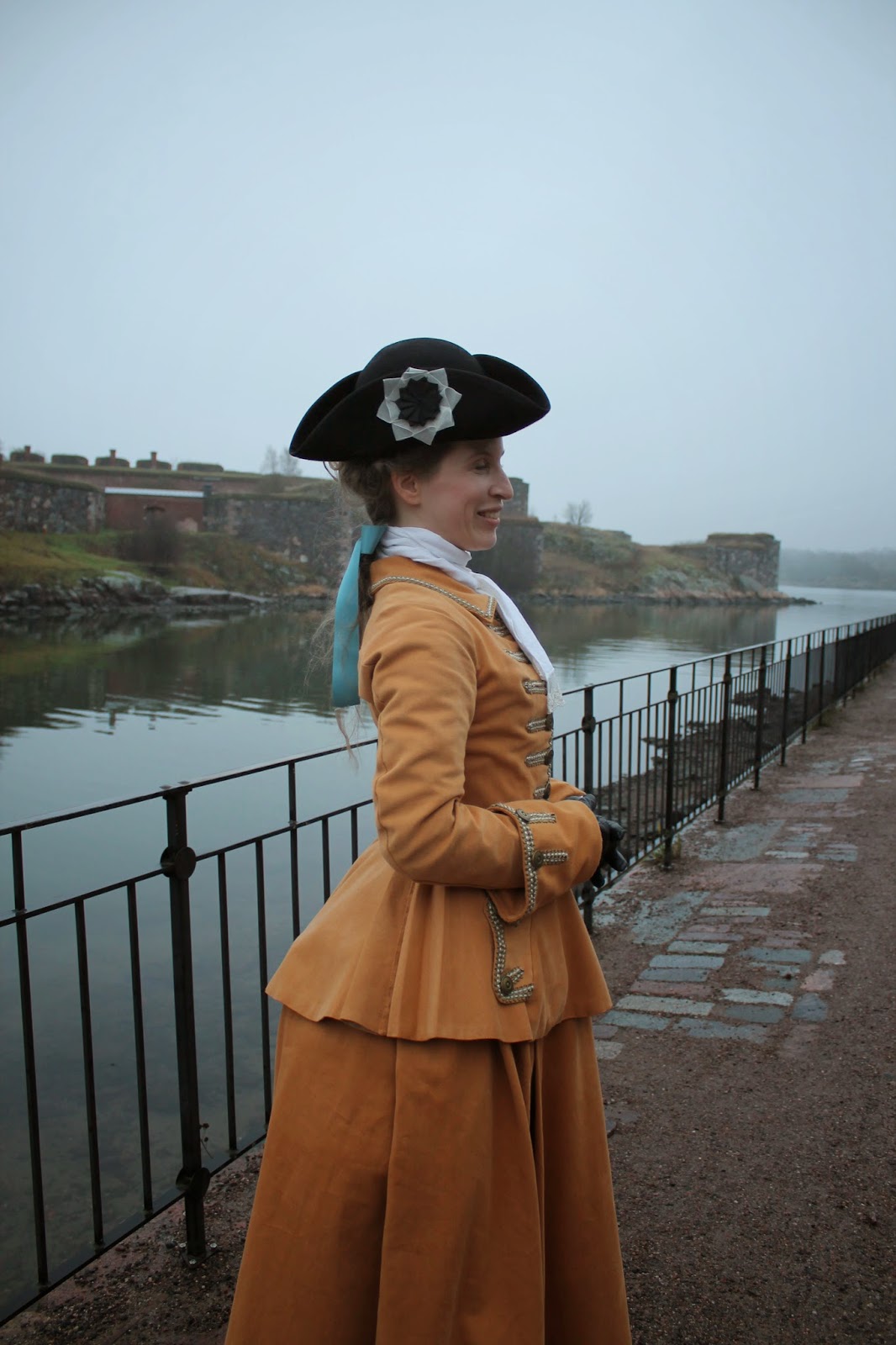 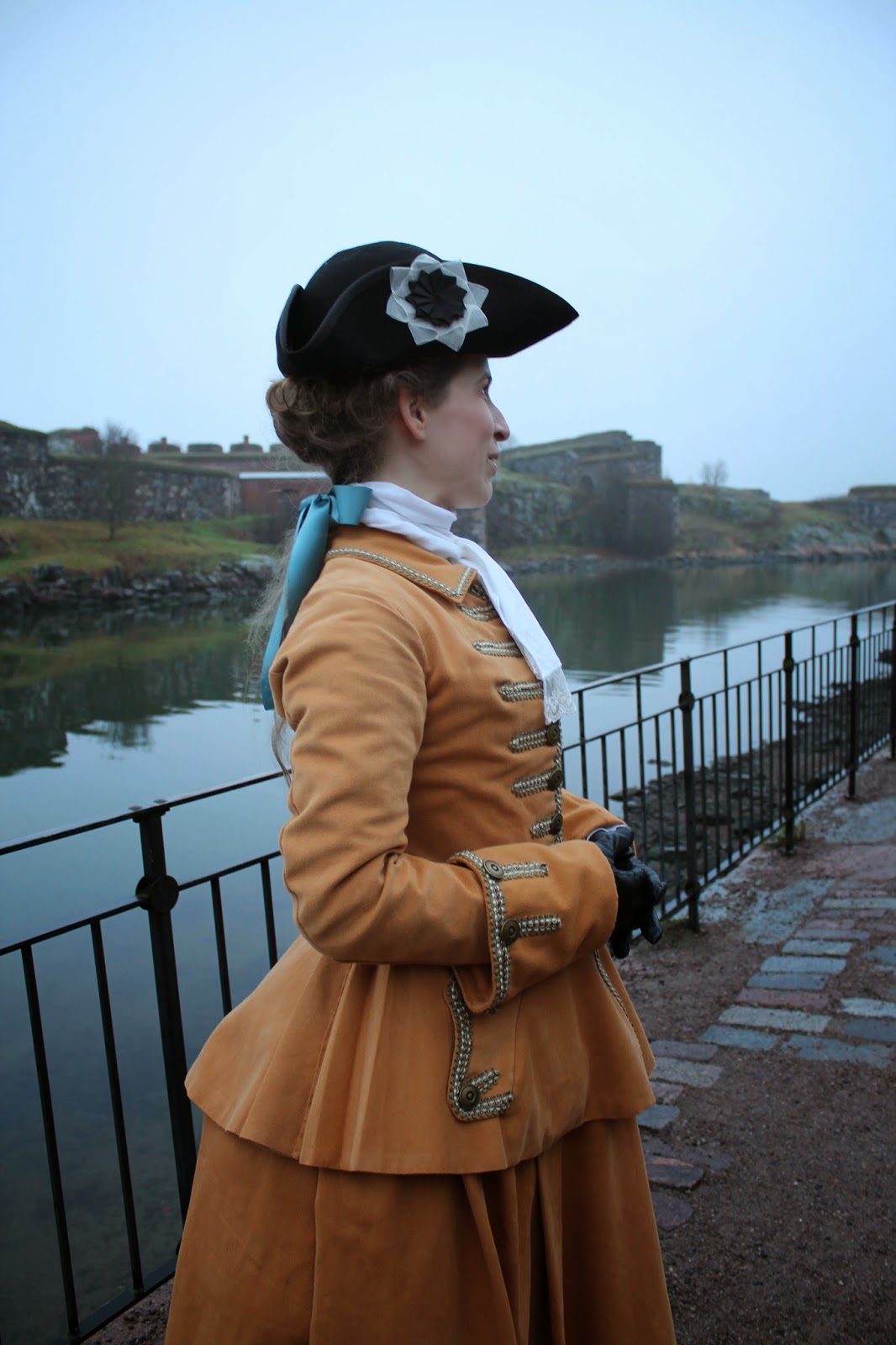 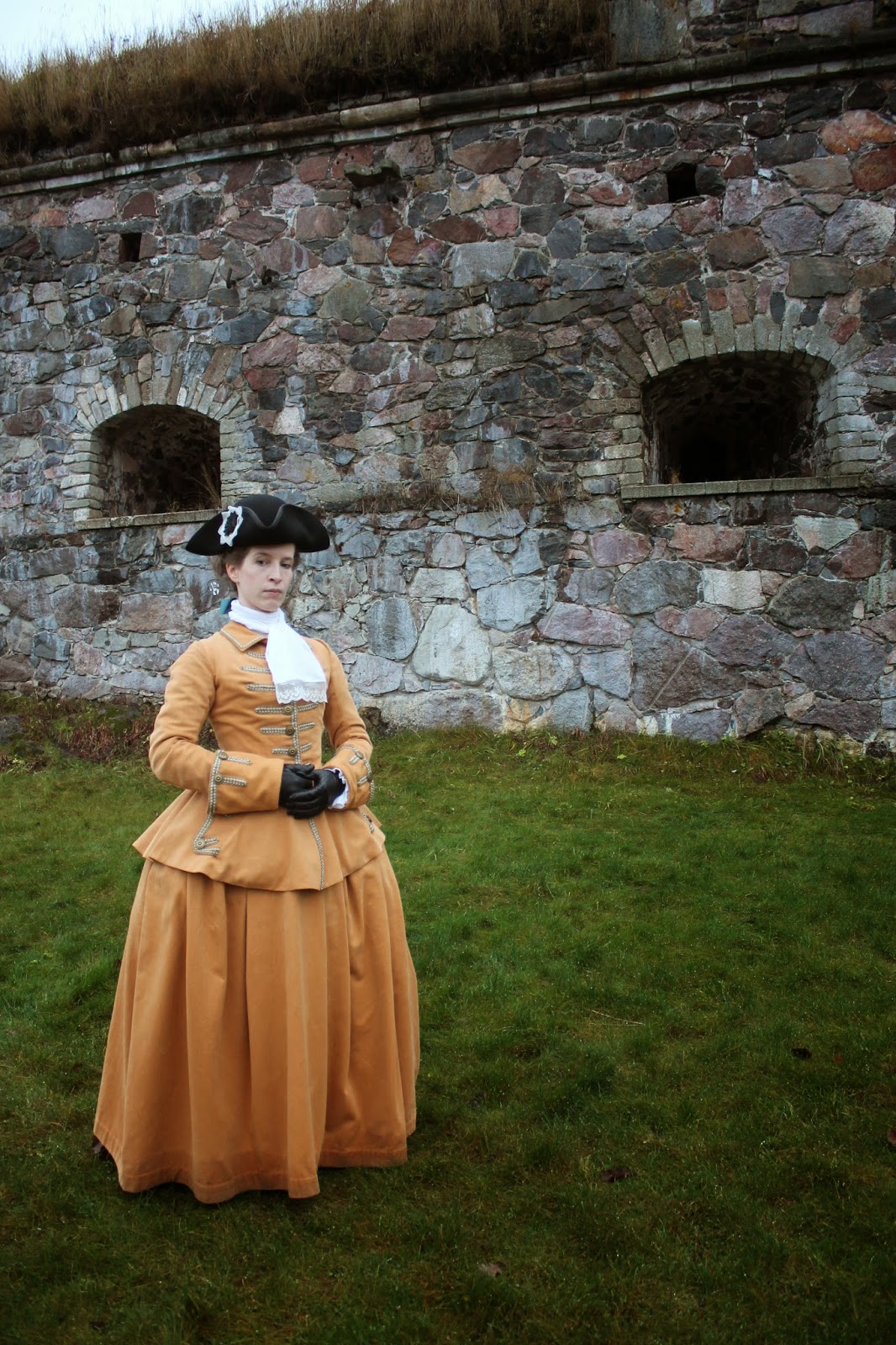 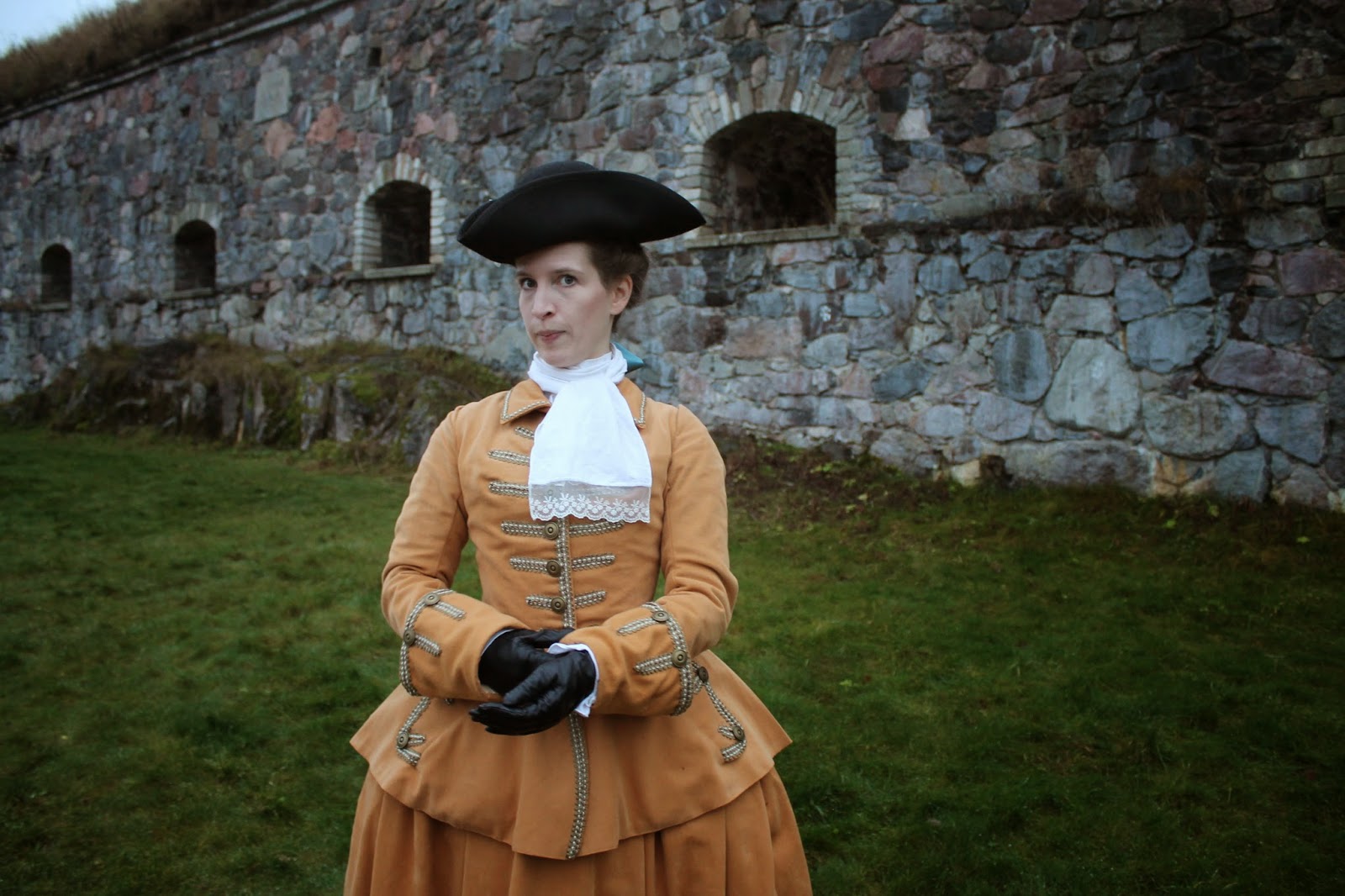 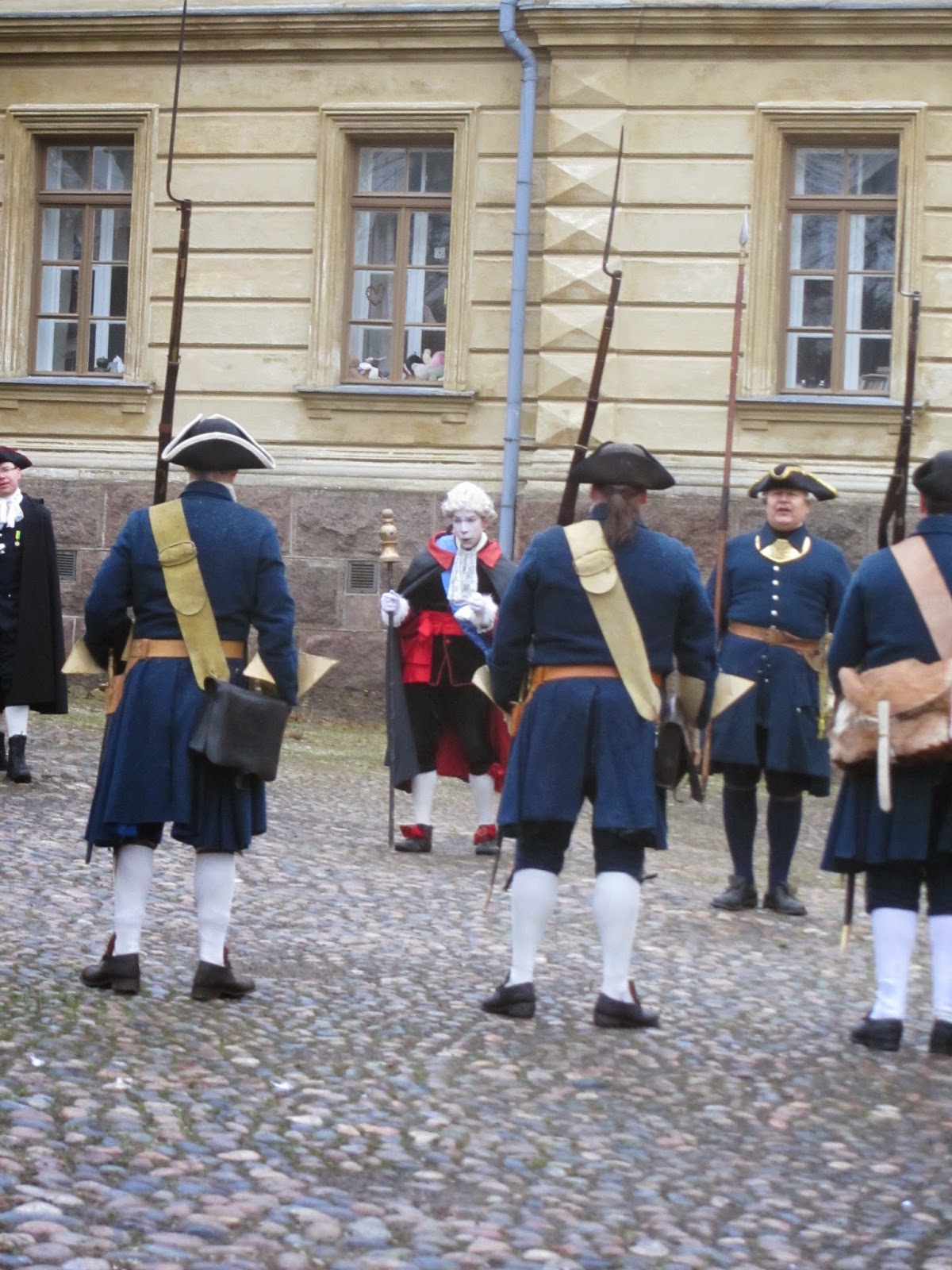 I've often used vintage sarees for my costuming projects, here's yet another one. I bought the saree earlier this year with this one and it's been sitting in the cupboard, waiting for the opportune sewing project to come along.

I decided to make an 18th century roundgown, mainly because the saree had a gorgeously embroidered pallu end and I wanted to make the most of it. 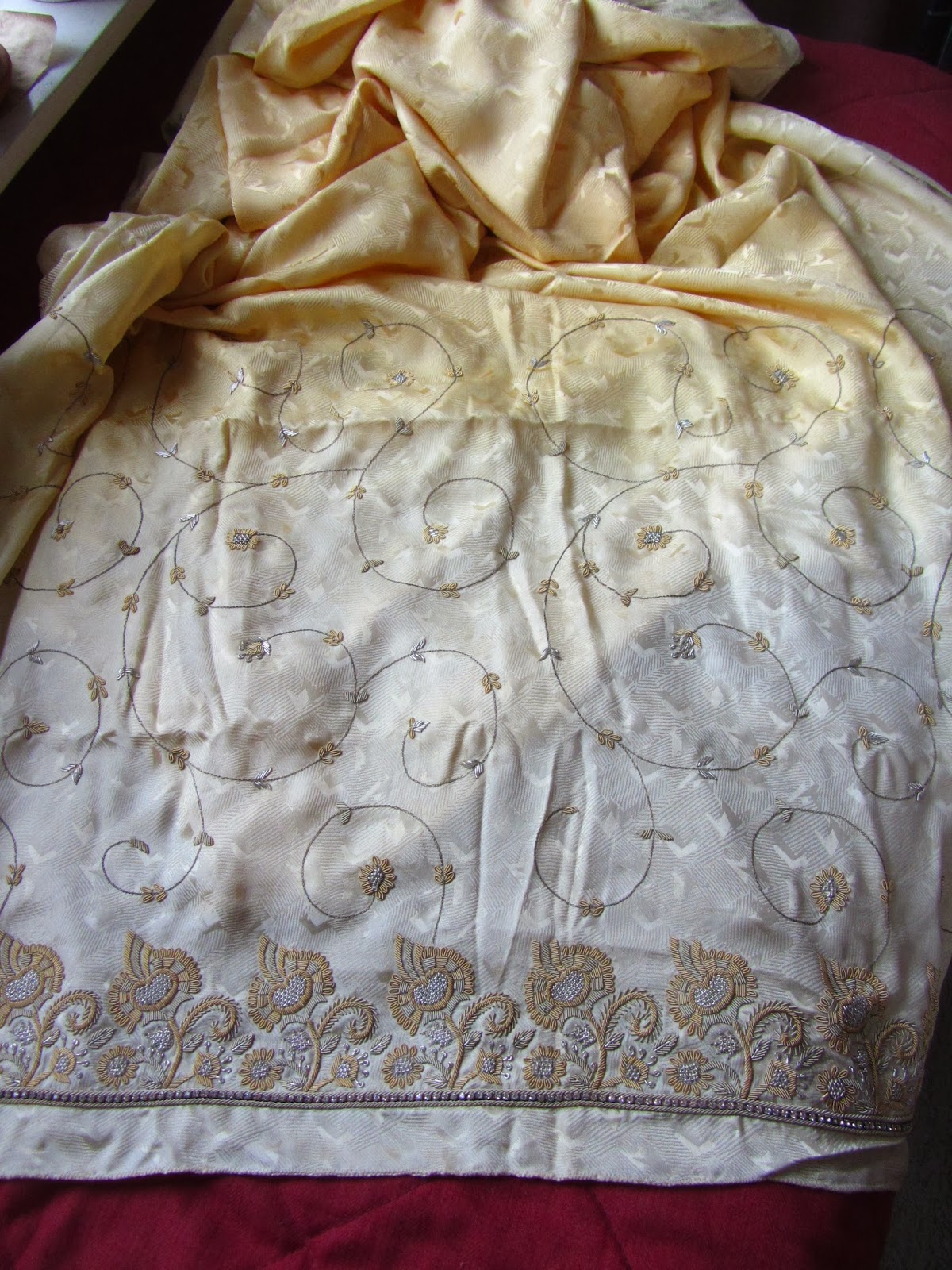 I used the round gown in Janet Arnold's Patterns of Fashion as guidelines and used my anglaise bodice lining pattern as the bodice pattern for this gown too. I would have wanted to make another en fourreau gown, but due to the fact that I was working with a saree, I could not have cut the en fourreau back out of it. I opted for making the bodice and the hem separately and joining them in the end. I didn't really like that and still think that an en fourreau back would've looked better. Ah, well.

The fabric was annoying to work with, it's very drapey, soft and--I'm now convinced--part liquid. Also, the metal embroidery is fairly heavy and while that's nice on the finished gown, while sewing it added a level of difficulty.  I lined the bodice with cotton and bound all the edges with bias tape inside the bodice to give it a modicum of stability. The hem was scream-inducingly hard to pleat and level (due to fabric quality and that metal embroidery) and I actually ended up asking help from Sanna (Rococo Atelier ) and other friends in attaching the hem to the bodice before the Christmas ball in Suomenlinna where I first wore it.

I trimmed the gown with gold lace, which is probably not as common as white lace in extant gowns but I managed to find some examples browsing different museum databases.

After the Christmas ball I realised that I didn't have any good photos of the gown so today I decided to dress up and snapped a couple. 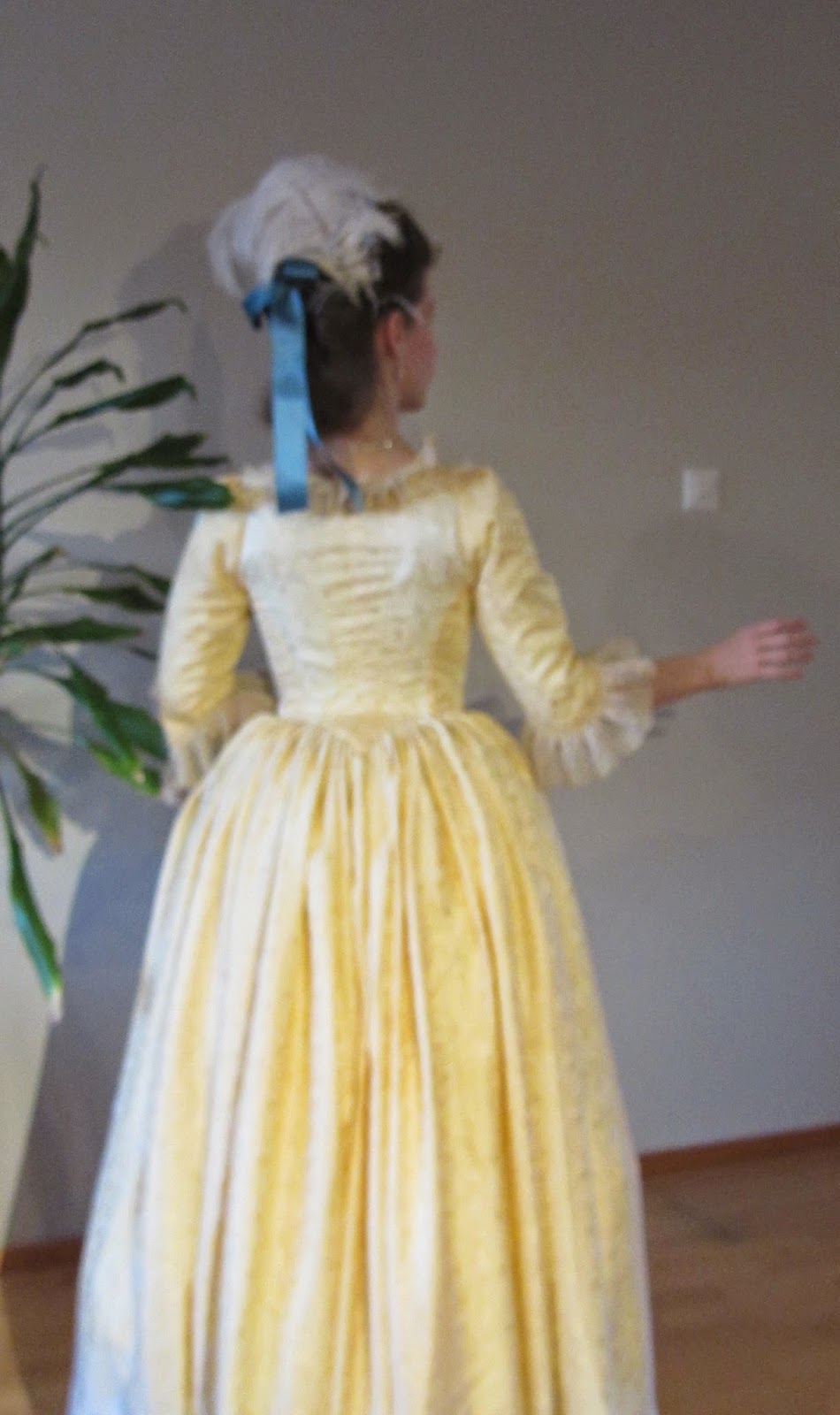 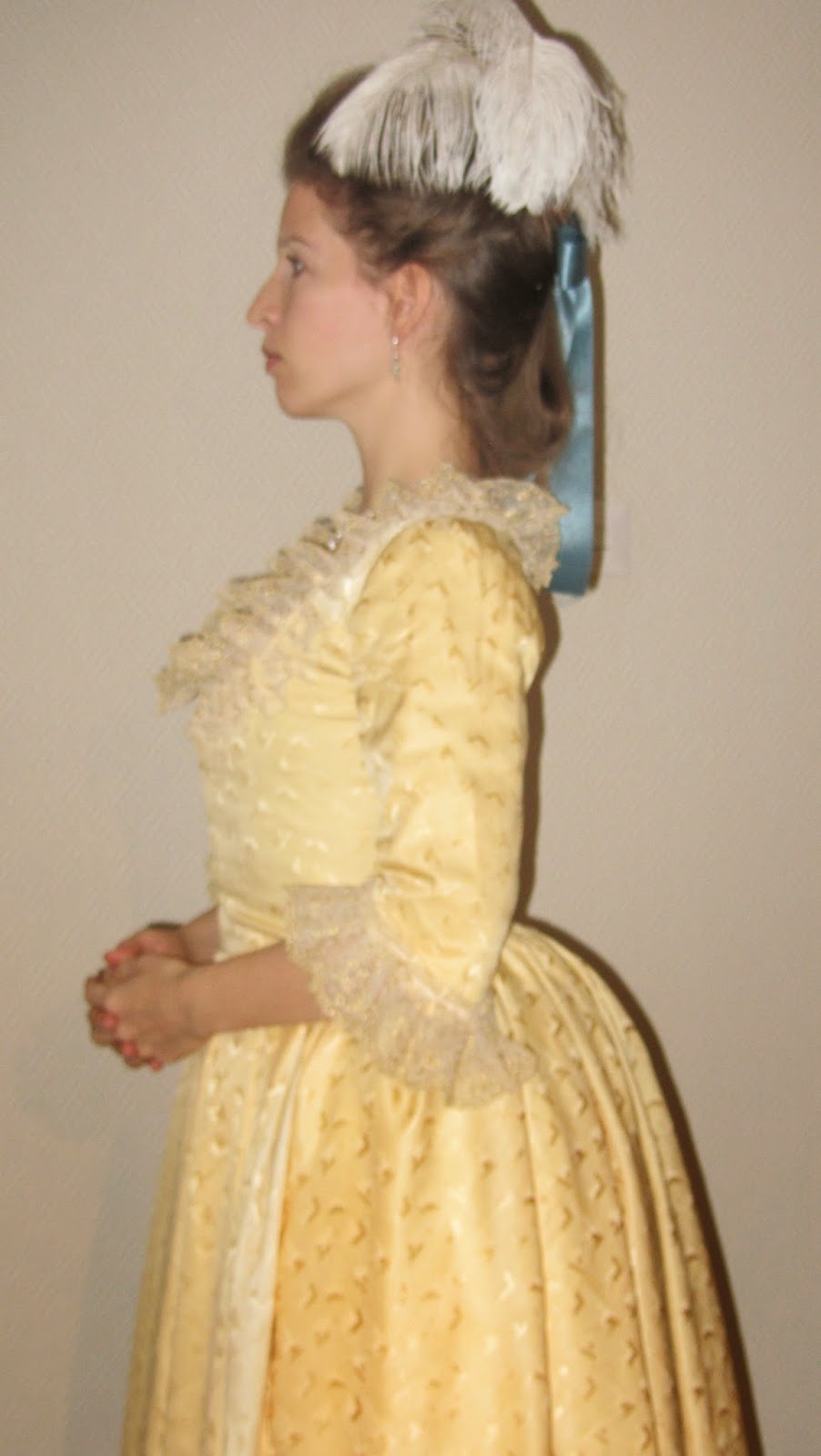 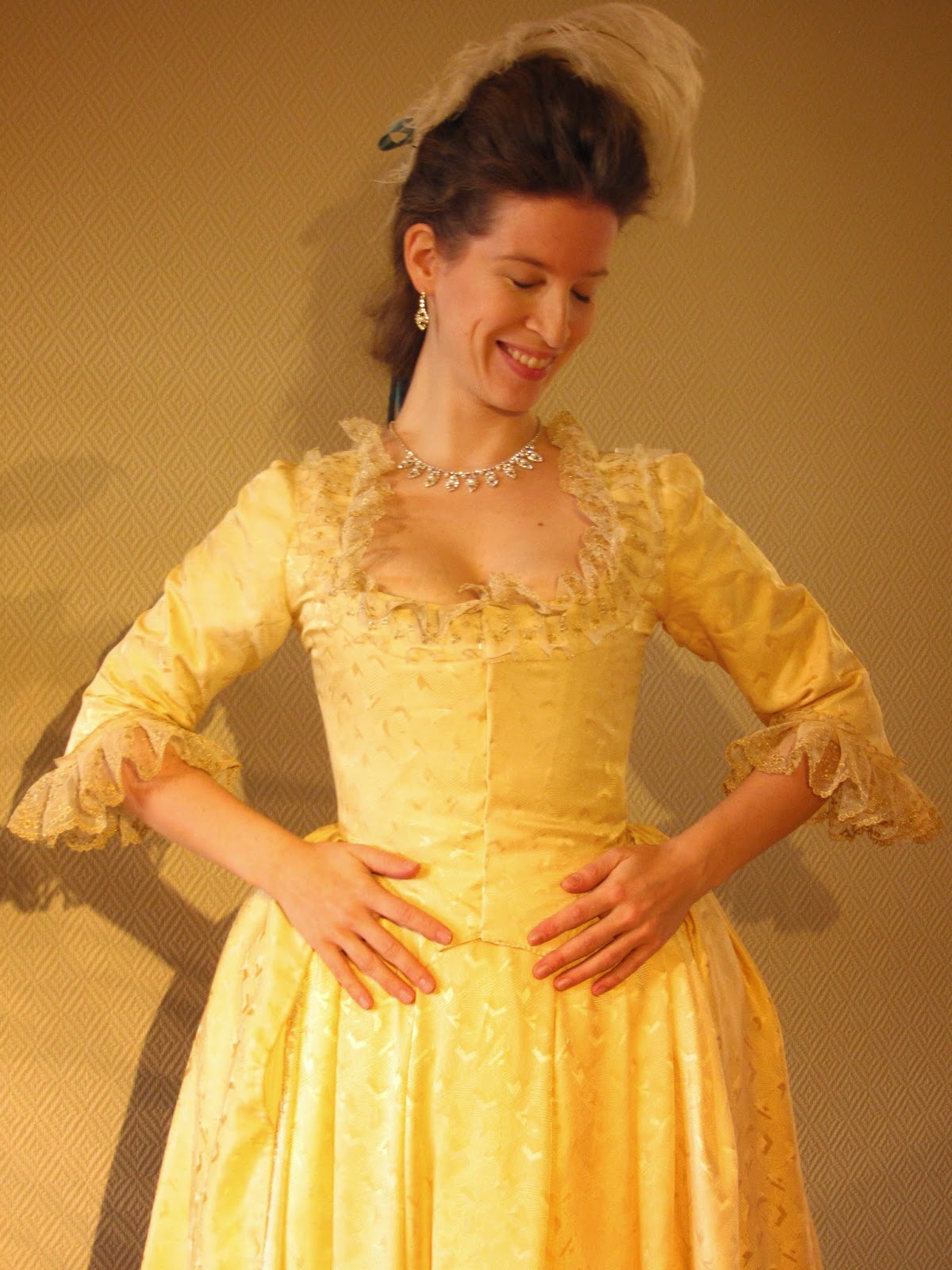 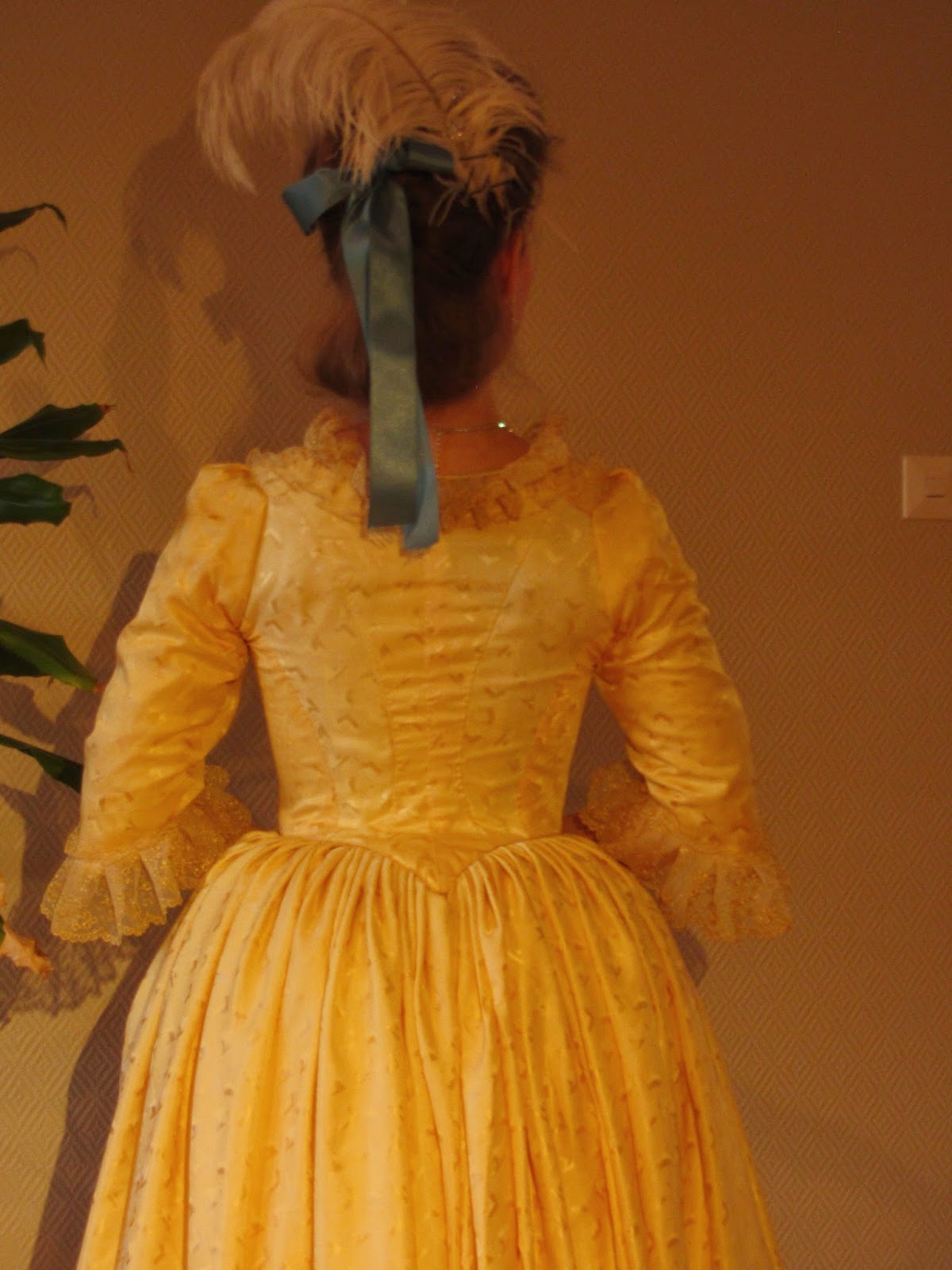 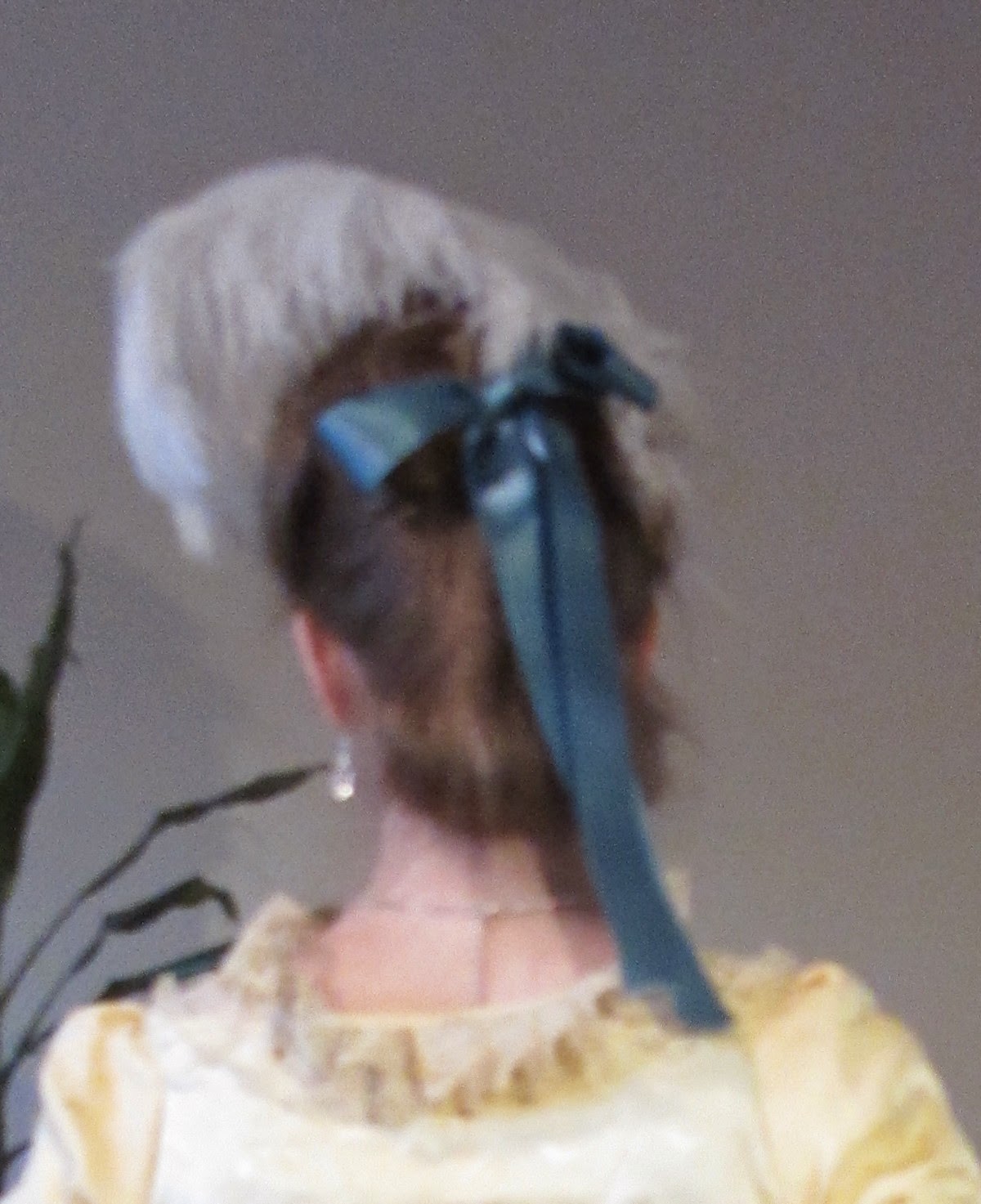 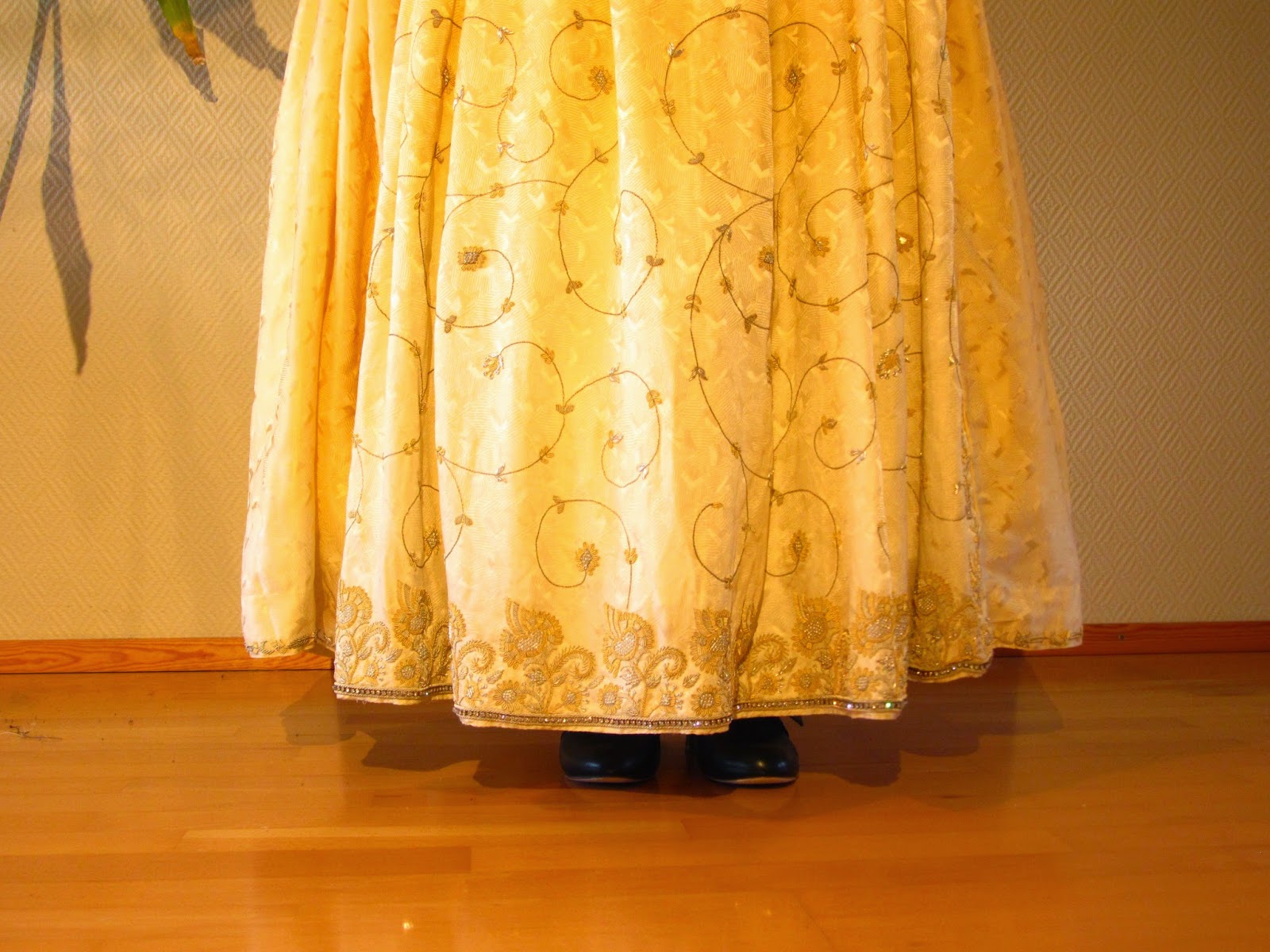 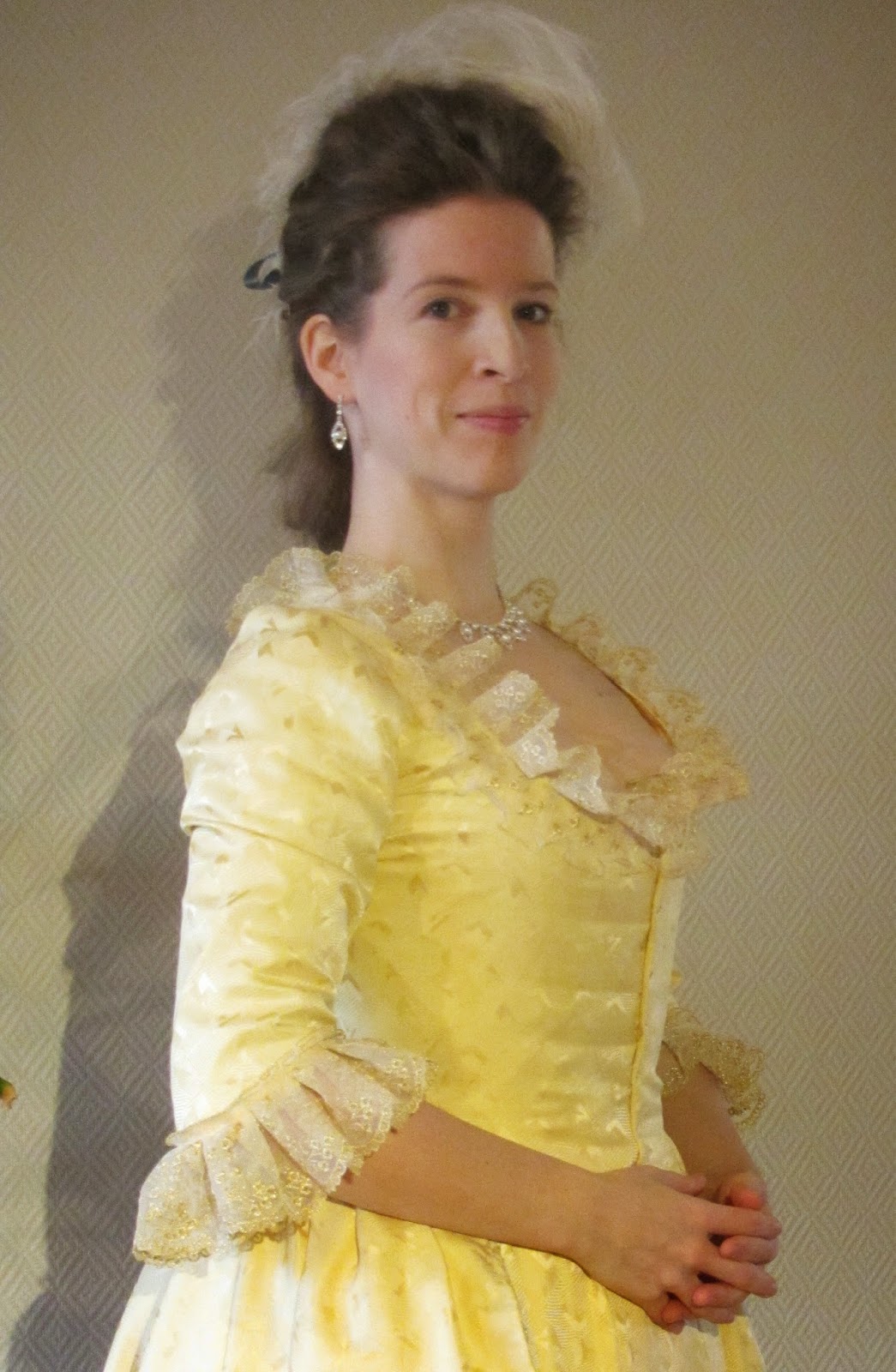 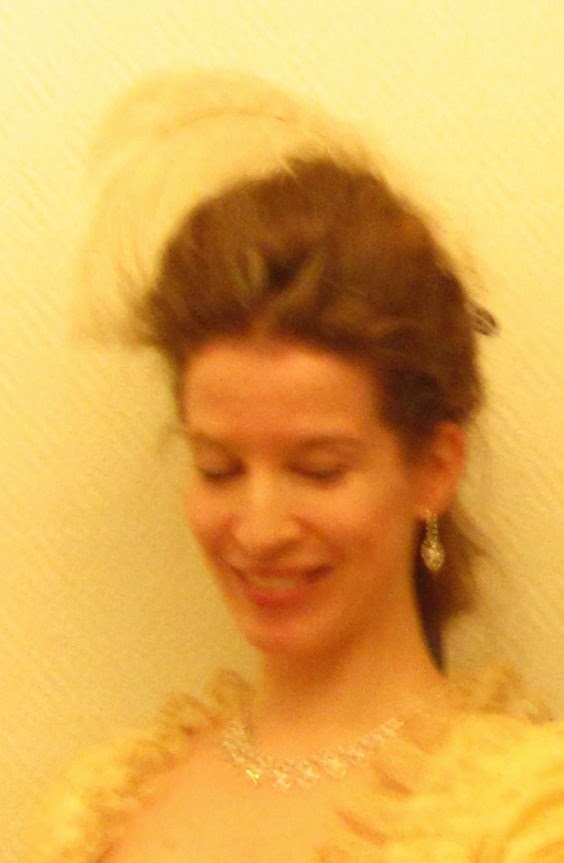 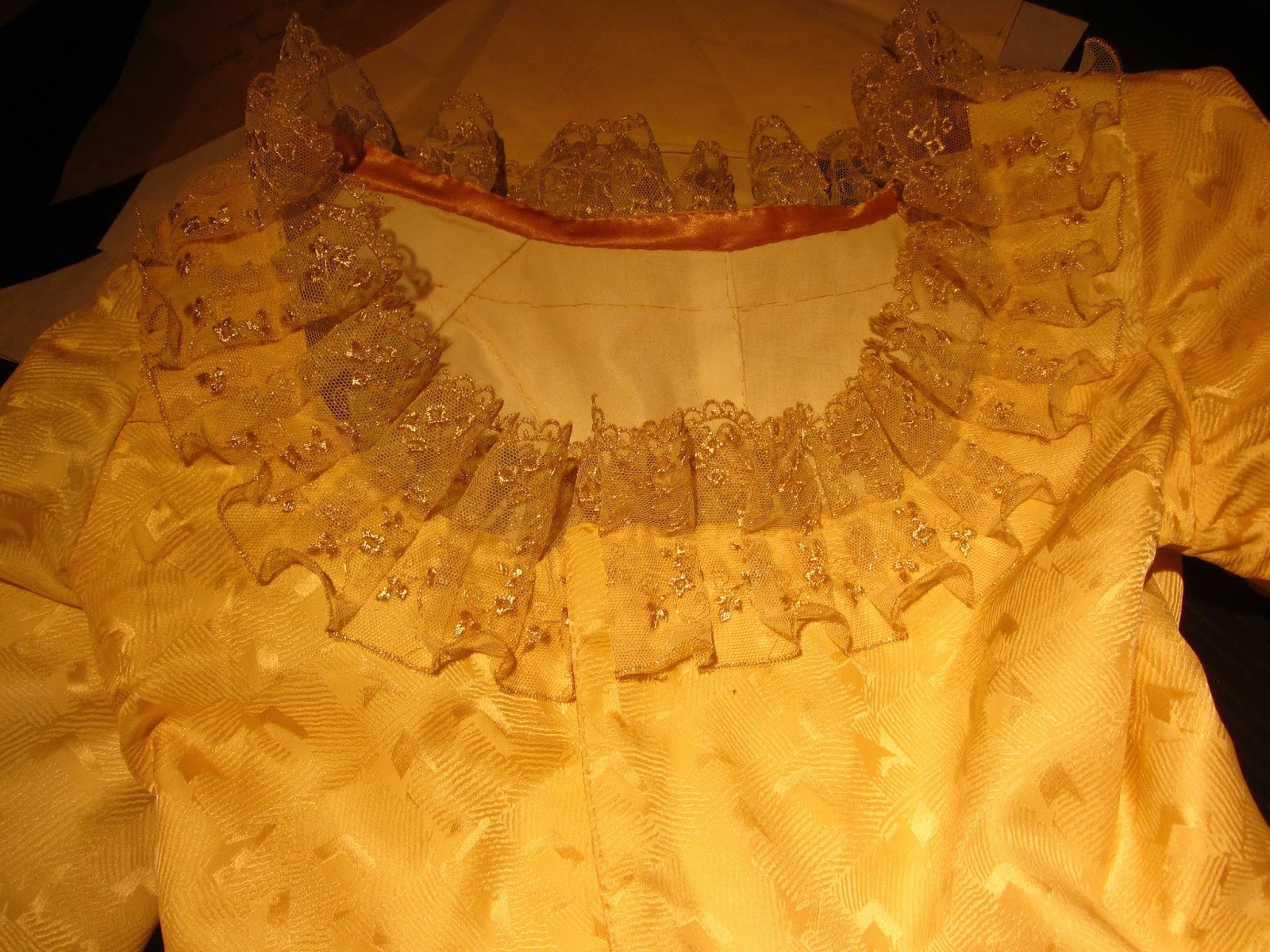