Today I found myself thinking that what if I finally made 1790s jacket and gilet? You know, inspired by the famous KCI jacket and gilet. I don't want to make an exact reproduction because that has been done by others several times over (and very beautifully too, I might add). I simply like the shape of the garments and would like to try and make something that has that similar elegance. Also, when I first started costuming my first effort after I had managed to put together a set of 18th century underwear was an approximation of a pierrot jacket with a false zone front. It didn't really work out in the end but I'd like to have another try at  that 1790s style and see if I've learned anything over the years :)

I have some buttercream coloured taffeta which would be enough for the gilet/waistcoat fronts and I still have loads of green striped cotton which I originally bought for a robe à la francaise (a project doomed to fail from the start; it was too much too soon) but which eventually became a spencer and an open robe. I still have at least 2-3 metres of the stuff, so it should be more than enough for a short jacket and being striped, it fits the late 18th century style. I have a white, ruffled petticoat that I made for the red and white striped anglaise, so it would go nicely with the jacket and gilet, too.
Lähettänyt Nora klo 2.42 Ei kommentteja:

I must extend my sincerest apologies to Gina and Åsa who both gave me the Liebster award. It's taken me forever and a day to do anything about it, but now I finally got around writing a post and answering the questions. I'm very flattered and happy about both of their recognition and nice comments, thank you!

There are 4 tasks to do when you're awarded, first thank your awarder ( done!), nominate other blogs to whom you want to give the award, come up with questions to which you want your recipients to answer, and lastly, answer the questions posed to you.

Apparently the idea behind this thing is to promote blogs with less than 200 followers so with that in mind I would like to give this award to the following blogs:

Mouse Borg Designs
The first thing I ever saw from Mouse Borg was her fantastic reproduction of the KCI 1790s drawstring jacket and a massive lampshade bonnet. Wonderful projects!

Anno 1776
Can't wait to see what her next post is about. That Worth gown reproduction is to die for and the 18th century gowns are gorgeous!

Paniirena
I don't speak or read Russian, so this is more of an eye candy  thing :) I love the gowns, the horses and the photos are so beautiful!

Joyscat
Same thing as with the previous one, can't understand the text but love the photos and the costumes!

I think five is enough for now, though in all fairness I should probably give twenty awards... Also, Gina's Beauty From Ashes and Åsa's Fashion Through History are some of my favourite haunts; I would've awarded them if they hadn't got me first! Their teens and Edwardian sewing projects are very inspiring and make me want to sew something from those periods too!

1. Do you have a favourite historical period?
2. How, when and why did you start costuming?
3.What is your favourite part about costuming?
4. And the least favourite part?
5. Which do you like better, sewing by hand or using the sewing machine?
6. When it comes to sewing and costuming, are you a planner or do you just dive in and make it up as you go?
7. What inspires your sewing projects?
8. Do you have costuming idols?
9. If you had an unlimited budget and all the time in the world, what would you sew?
10. Which of your projects/costumes are your favourites and why?

Since I got two awards, I'll try my best to answer both sets of questions or combine them when appropriate. Right so. Here goes.

1.  Who/what is your source of inspiration for your costuming?
I have many sources of inspiration for my projects. I suppose that so far most of my inspiration has come from extant pieces of clothing, paintings and some aspects of historical dressmaking (such as block printing). Also, I love reading other costumers' blogs and if I'm very lucky, sometimes meeting up with other costumers and finding out about their projects. That's another big source of inspiration.
2.  Why do you or what caused you to get started costuming?
I strarted costuming in 2011. I was working only part-time the whole year and I thought that it'd be nice to have a bigger sewing project. I had thought about making an 18th century ensemble for a while then and just went for it. Funny how things turn out. :)
3.  What is your favorite part about costuming?  Research?  Sewing?  Creating?  Wearing your outfit? I love creating the most, I think. When something I've thought about and mulled over turns out just the way I want it, it's a great feeling. I'm a bit lazy researcher (said the PhD student...) but lately I've got more into it. Of course, wearing the finished outfit is also one of my favourite parts, but I'm also fascinated about what goes into creating the look for a certain period. Having a suitable event where to wear the finished piece is also kind of neat.

4.  What is your ultimate goal in costuming?  To get better at sewing?  To visit a fabulous place and have tea or get your picture taken?
My goal in costuming? When I started this, I don't think I had any other goal than to see if I could make 18th century clothes. As it happens, practice makes you better. I like the fact that with each piece of clothing I make and with each new sewing project I take up I can learn new things, new ways of doing things and often even surprise myself when I manage to put together something I didn't think I could do (like the 1880s corset, for example).

The Courtois dress: the latest stage

Things are chugging along with the Courtois dress. I made the sleeves and set them in and I've also sewn all the hooks, eyes and yarn loops on the fronts. I tried the whole dress on again today and took some photos which are below.

I might still take in the front of the jacket a little over the belly; there's quite a lot of looseness there. Although, when I sit the front hem of the jacket spreads out nicely and there is no weird wrinkling.

I've noticed that every time I put on the corset the result is a bit different. It doesn't always sit in the exactly same place as before, and sometimes I manage to tighten the laces more evenly than before. Also the fit issues I mentioned in the previous post were due to my lacing of the corset tighter than before. I think I need to practice lacing and placing the corset more to get more even results. 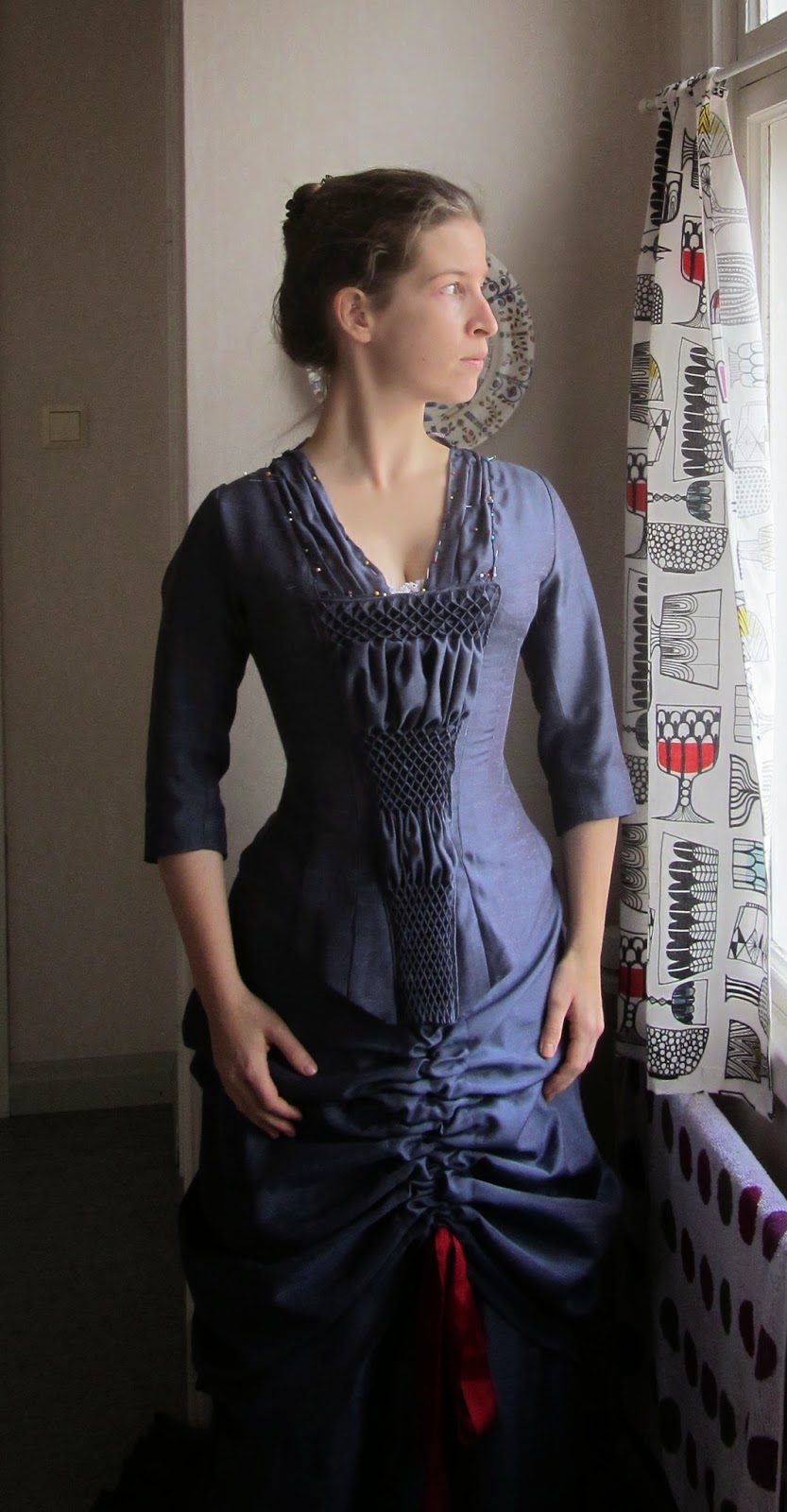 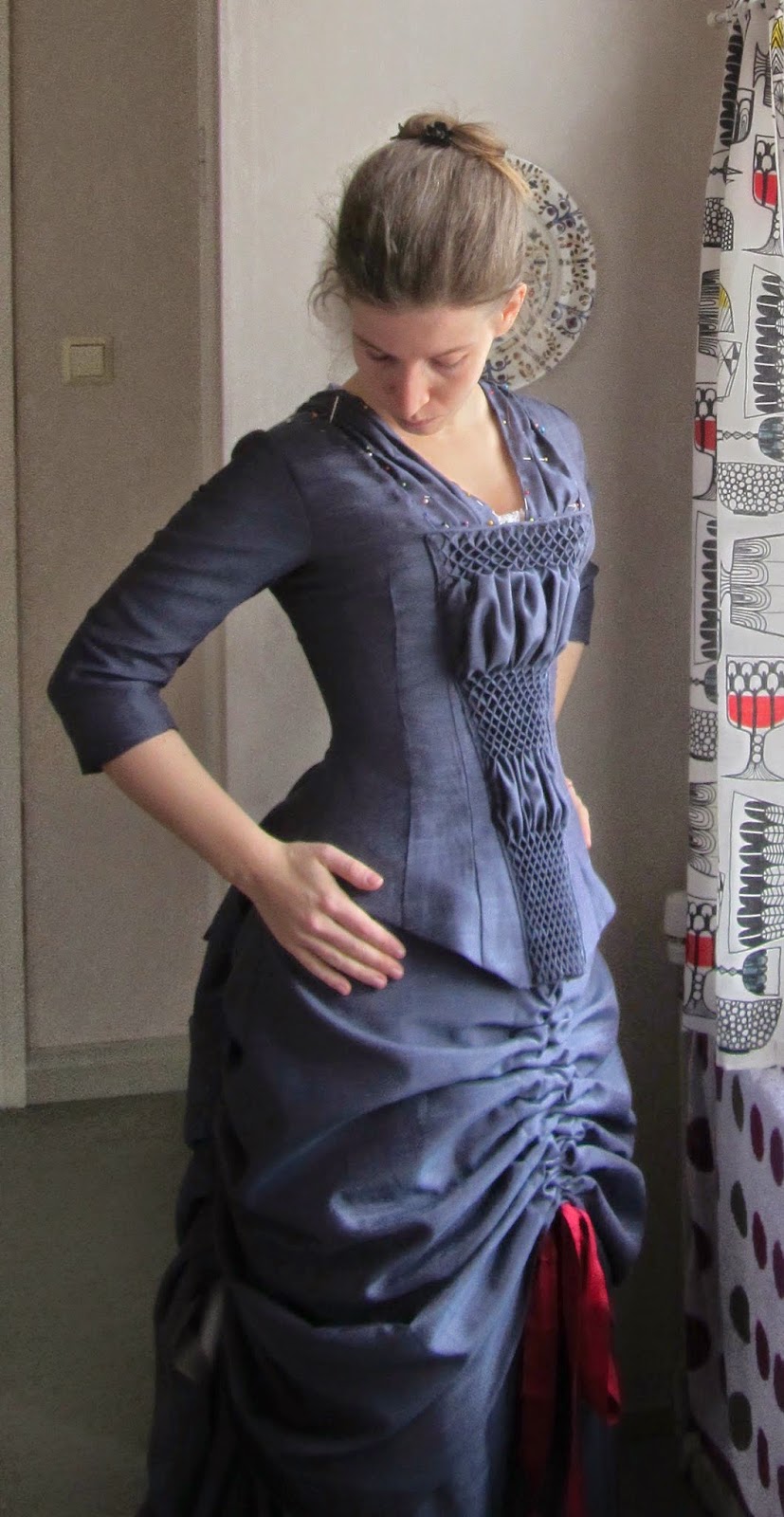 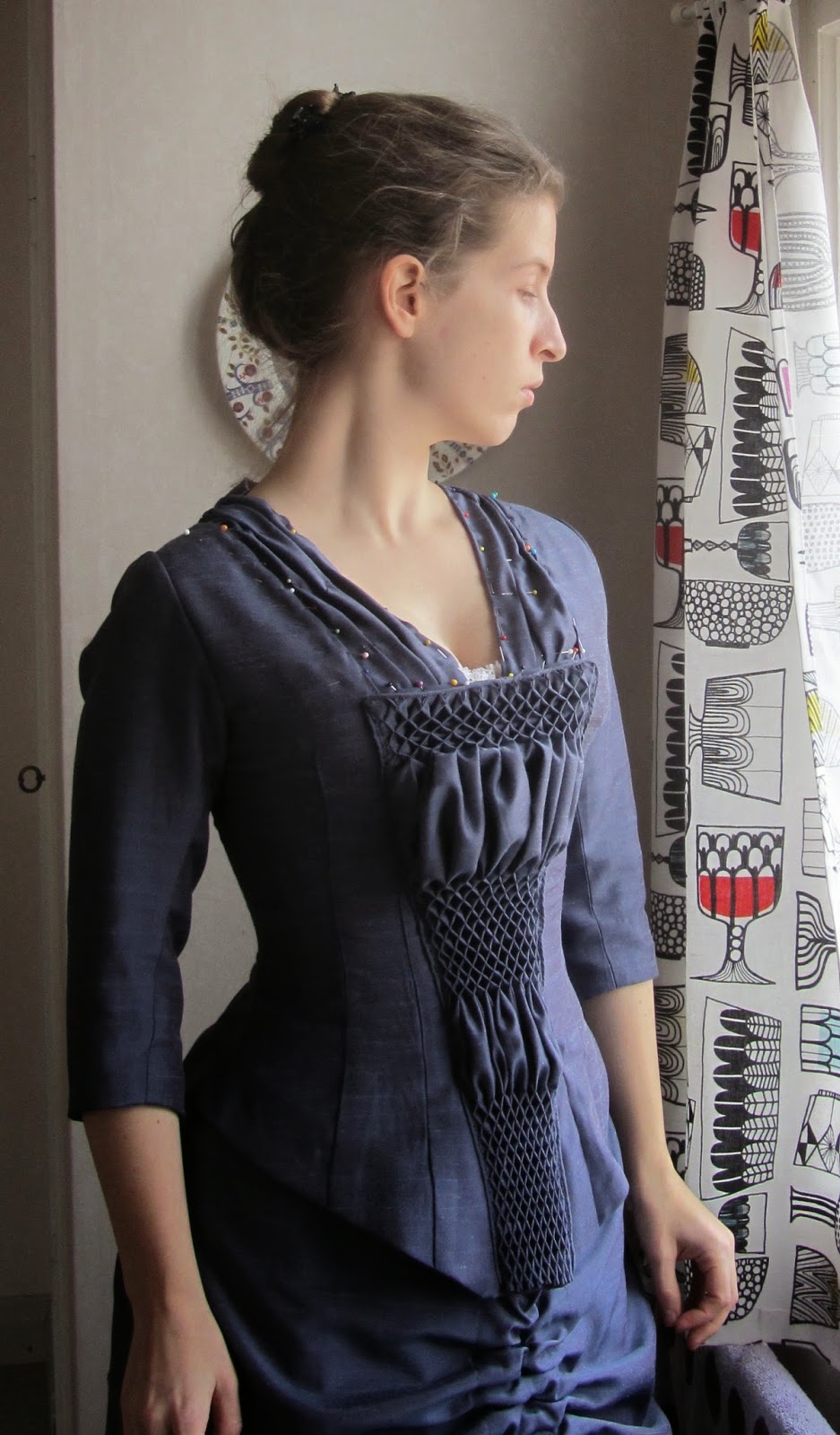 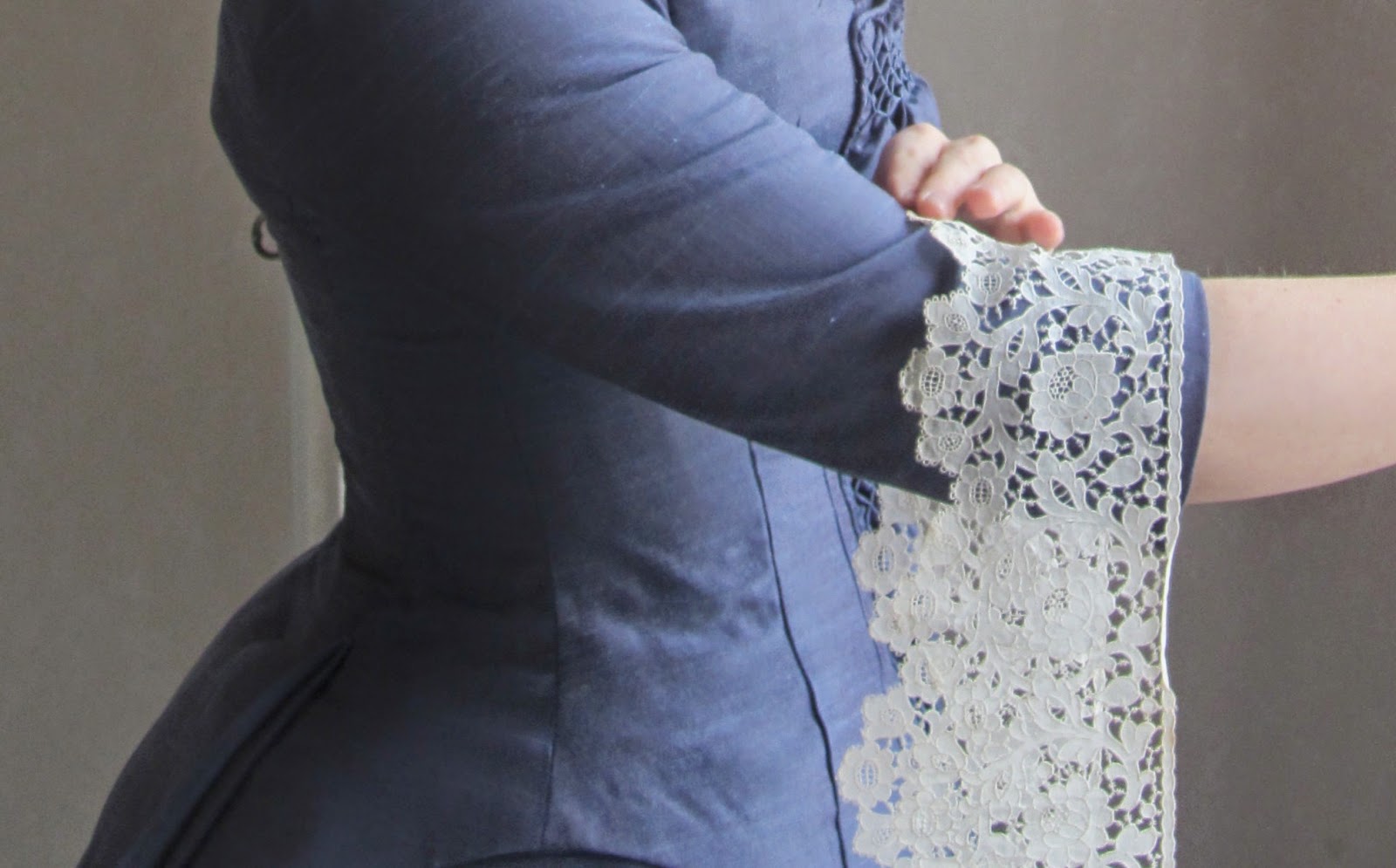 Here we go again, it's Courtois project time. I've been working on the bodice, little bits and pieces every day and so far I have:
-sewn in the bone casings and put in bones on each seam and the front darts of the jacket
-determined the method for making the front of the jacket to look like the original portrait; I'm sure there are many different ways to do this, I chose to copy and apply the fastenings used in this extant gown.
-faced the front and side piece hem of the jacket and
-turned in and stiched the back piece and pleat hems
-sewn on the waistband

I still have to
-sew hooks and eyes on centre front edges
-finish the centre front panel (the back of the panel, to be more precise)
-sew that panel on the jacket and sew hooks and possibly yarn loops to attach it
-set in the shirred pieces on the neckline and make a small collar (onto which I can then baste the lace)
-make the sleeves
-trim the overskirt with a pleated fringe and ribbon loops

Here are some photos I took this evening. I think I might have laced the corset a bit tighter than before, since the jacket suddenly has odd fit issues on the side back waist.