As you might remember, I originally bought two sarees for my Regency dress projects but as fate would have it, I ended up making something completely different out of them. The first, yellow one became a 20s dress and I'm still very pleased with it. The second saree was (possibly) silk blend fabric, and embroidered in the traditional Indian kantha style, which is, in the lack of a better word, rather rustic. So it really didn't look like Regency dress material.
Instead, I made it into a petticoat and a caraco jacket, á la 18th century. I modified my black print jacket pattern (originally from the Costume Close-up book) and did some piecing and fiddling and managed to put together the jacket out of the more densely embroidered pallu end of the saree. The petticoat is a bog-standard 18th century skirt, nothing interesting going on there; happily I was able to cut the petticoat so that the nice embroidered border of the saree fell on the petticoat hem.
The jacket closes with three horizontal straps, each on opposite side from the others. I was inspired by the beautiful caraco in V&A and the strap-fronted pierrot in the Cut of Women's Clothes book. 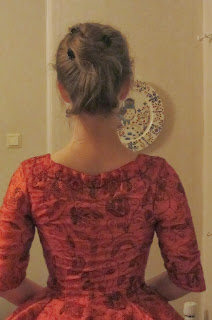 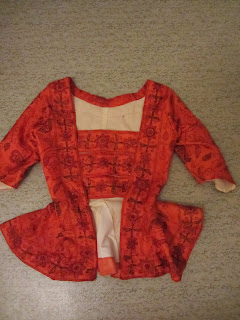 I've only been busy with studying and stuff. I have nothing to post about yet, but I'm soon hoping to finish the petticoat and caraco combination I'm making out of the other saree I bought. The saree was a vintage one, like the yellow saree, and the colour is strong reddish orange. The saree is embroidered in the traditional kantha style and I think it sort of works for 18th century styles. I'm not sure what the fabric is exactly but I would guess silk blend. But no pictures until I've finished it!

Instead, here's a couple of photos of a shawl I spruced up with block printing. The shawl is cotton, a flea market find and I hand printed the motifs with my lovely Indian block prints. So, a paisley shawl on a budget, one might say :) 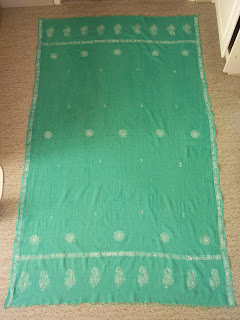 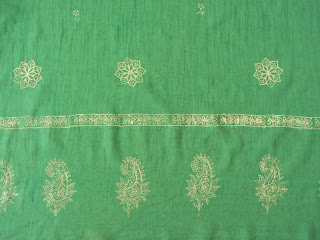