I made a 1910s Armistice blouse because it's apparently a regulation item to have in any 1910s wardrobe. Granted, it is a bit later fashion than the roughly 1914 look I'm generally going for with my 1910s project, but I like the look and to me it epitomises the way that 1910s fashion developed to a more casual and usable direction.

I found nice buttercream linen in my stash, just enough for a blouse like this.

I didn't use a specific pattern though I worked on the basis of the Folkwear Armistice blouse pictures and reviews. I used my own plain bodice and sleeve pattern, lenghtened the shoulders of the back piece to wrap over to the front as a yoke, gathered the front pieces to the shoulders and made a centre panel of a separate piece. The blouse is mostly handsewn and the side seams and the sleeves have French seams on the inside to keep the fabric from fraying. I made the centre panel pin tucks on the machine. The buttons on the front are decorative because I can slip the blouse on over my head. I hate making buttonholes, so that's a plus. I pleated the back piece of the blouse loosely and sewed a ribbon on top to help with the gathering of the hem.

I'll take more pictures of it on me and with a skirt once I've made one, but for now this has to do. 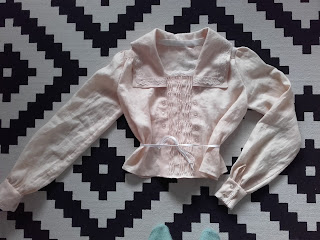 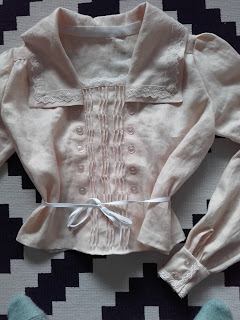 I have something new to share at last! I've started a 1910s project partly because I've been planning that for a long time and partly because this year is the centenary of independence in Finland and I wanted to do something costumey for it. I even put together a loose outline of a sewing challenge for my reenactor and costumer friends around here and I think we'll have an event or two around this theme later in the year. The basic idea of that challenge is to make some kind of outfit in the fashion of 1910s; everybody can choose the year they like best, for me it's turning out to be 1914.

So far I've been sewing the underthings, of course, and they're finally done. I made a shift, a corset, a petticoat and a corset cover.

The shift is a simple shape, with a lace yoke and straps, a drawstring at the waist and a gusset flap that buttons on the front and back hem between the legs. I modelled it after this and other similar 1910s examples: 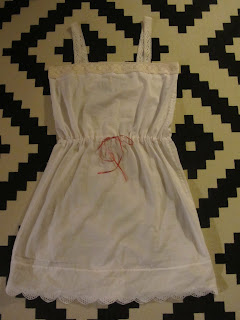 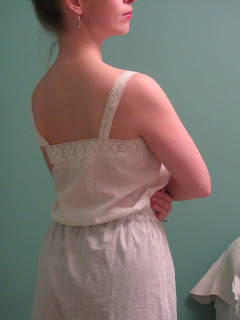 I made the corset using the 1910s pattern provided by Jennifer of Festive Attyre. I found her instructions very thorough and useful though I could've chosen a better fabric and in retrospect the corset turned out a bit too big for me. But to take it apart is just too much for me after the super annoying sewing process (bad fabric choice, sewing machine playing up, nerves in frays, not good). 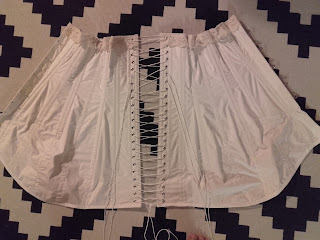 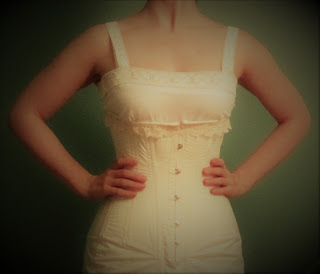 Because I've narrowed my wardrobe choices roughly on 1914, I needed a relatively narrow petticoat which I modelled after this advertisement picture from 1914. The skirt is narrow at the hips and there is a box pleated hem flounce that starts at knee-height.

Lastly, I made a little corset cover blouse. Many such blouses of the era seem to have been loose-fitting and baggy at the bodice, with a drawstring at the waist but somehow that didn't work for me. Also, I'm cheating a little: I'm wearing a modern bra under my shift in these photos. Going without just felt too emancipated and uncomfortable and I wasn't able to tuck the shift into my corset securely enough to support the bust (as they apparently did in 1914). I might make a 1914 version of a brassiere later if I feel like it. 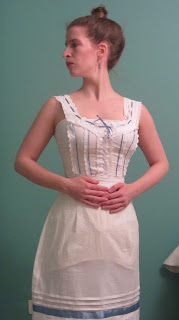 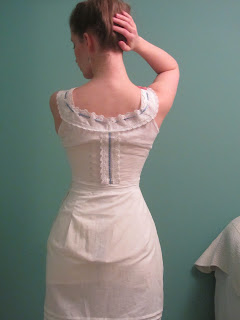 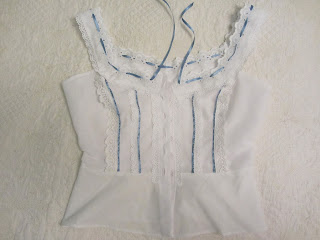 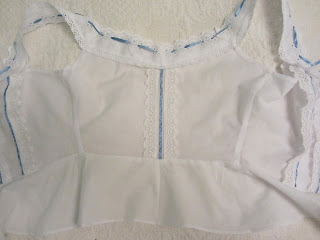 Next up will be a walking suit. I'm fascinated by the baggy skirt fashion of 1910s and will try to produce something similar. I also have a vintage saree set aside for an evening dress.
For inspiration I've compiled a couple of pinboards of 1910s fashion and 1910s underwear .