I've been a bad blogger, I know, but I have some progress to report. If anyone still remembers, I set up a 1910s challenge for myself and some costumer friends to commemorate and celebrate the centennary of independence this year here in Finland. The plan is simply to make a garment from any year of the 1910s and eventually get together to admire our handiwork and toast the 100-year-old nation.

So far I've made undergarments and an armistice blouse which I'm planning to complete with a walking suit, but the most progress I've made with the evening dress. I thought I'd share some of the in progress photos now, but leave the final reveal and in detail post for later, possibly until December. We are planning to dine in grand style on the 6th of Dec., the Independence day, so I won't show the whole dress until then :)

In preparation for this particular dress, I rounded up some fabrics from my stash, recycled some pieces for the under layers, and bought some new fabrics too.

I had this second hand embroidered saree I had bought ages ago: 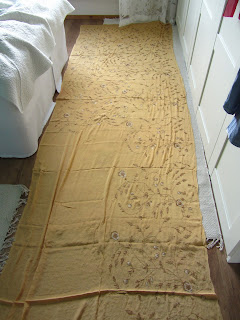 I used the unembroidered bits of it plus some taffeta and satin I had in stash for the undermost layer of the dress:

I have this one extant evening dress from 1914 that I'm using as my reference and inspiration, and it had a lace midlayer, so I followed suit. I bought sequined lace fabric on Etsy and I have since sewn more sequins and beads on it. 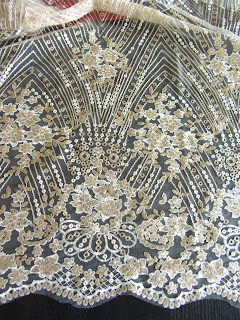 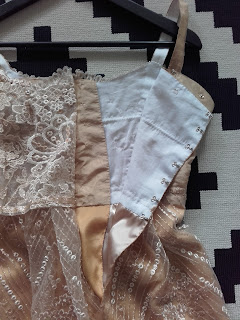 The top layer of the hem, train and part of the sleeve I made out of the embroidered bits of the saree.

There's also a sash in contrasting colour.
And that's all you'll get for now :)
Lähettänyt Nora klo 9.44 2 kommenttia: