Here's a little post about a dress I made recently. It's sort of 30s-40s inspired little number that turned out very nice in the end though I initially had my doubts. I had no set pattern for this dress, instead I combined several blouse and dress patterns and cobbled together something that corresponded to my vision.

The fabric is viscose, with black and cream stripes and because I wanted the dress have a little 'something' I cut the pieces on the bias and tried to place them carefully so that they made large chevron pattern at the seams. The dress has a zipper at the back and first I thought to have the neckline open too at the front (it actually has a slit and a hook and eye closure) but I then put on the giant bow and had to stitch it's upper corners on the dress for it to keep its shape.

I did most of the sewing by hand because of the bias cut; it would've been too fiddly on the machine, I feel. 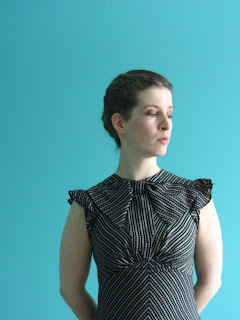 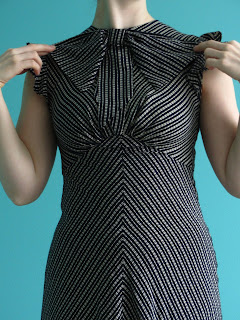