Return of The Pink Dress

I was in Helsinki last weekend for a dance work shop and I also had a chance to pop in Ateneum (the national gallery of Finland). They had a very interesting exhibition on called "Japanomania" and it basically dealt with the japonisme boom that was all the rage in Europe during the latter half of 19th century. The fad reached Finland (and other Nordic countries) a bit later than the rest of Europe, but it was very popular and many artists of the Finnish golden age lived in Paris and other large European cities at the turn of the century, soaking up influences and applying them to their own work. It was very interesting to learn that japonism had a strong influence in the development of the Finnish Jugend (Art Nouveau/national romantic/Arts and Crafts) style.

But I digress. As I was viewing the paintings and artefacts I came accross The Pink Dress again. A little explanation: last year I made my first natural form gown based on this painting by Gustave Courtois:

My dress is blue but pink seems to have been a popular colour with the French ladies, or then the artists liked the colour particularly. The Japanomania exhibition had these two paintings by Albert Edelfelt and Gunnar Berndtson:


This leads me back to the pink dress in the Courtois portrait, and this painting by Pascal Dagnan-Bouveret (Courtois's friend and Anne-Marie's (see first painting) husband): 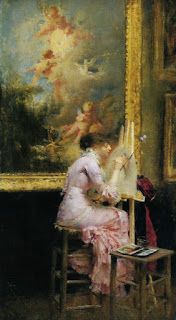 When I first found this painting, I thought that it showed Anne-Marie's dress (portrayed in the Courtois painting) from the back and in full length. But now I'd be inclined to think that this ^ dress, and the ones in the Edelfelt painting and the Berndtson painting following it are actually the same piece of clothing.

Of course there is no way of knowing if all these three dresses are actually the one and same dress, but there are some details that do point to that direction.

First, the collar. In Edelfelt and Berndtson paintings it's obvious, the dress is the same. I can't be so sure with the Dagnan-Bouveret painting, but it would seem so:

Then there's the waistband and the basque style of the bodice:

The dress (and possibly also the model) is the same in all these paintings. According to the info I found here, this is not surprising, since Albert Edelfelt and Gunnar Berndtson both used the same model for their paintings, namely Antonia Bonjean, who features also in this painting by Edelfelt (wearing another (or the same?) pink dress):

Are you still with me? All these artists (Courtois, Edelfelt, Dagnan-Bouveret and Berndtson) actually had studios in the same building in Paris at one point in the late 1870s. They also had the same model sitting for them all, pictured in several paintings painted within no more than 5 years. I think that's very interesting and also the artists kept liking the pink dress.

After taking such a good look at all these paintings and especially the dress I'm sort of half-heartedly planning another natural form gown, based on the pink dress. I don't know when I will have time to make it (March madness, so busy at the moment) and I'm not really sure about the colour but I like the shape and the froufrou of the dress and its connection to the Finnish artists.